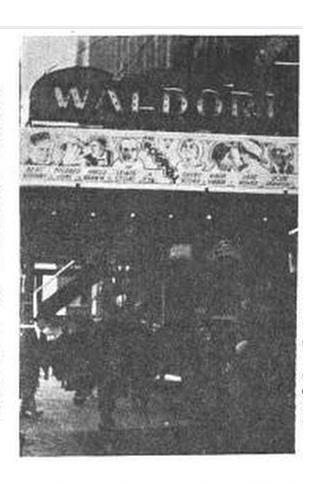 The Waldorf Theater was opened around 1913 and was located next to Dreamland Theater. Later in life, it housed a nightclub before being demolished in the 1980’s and is now an empty lot.

It really bothers me to read that a theatre site is now a parking lot!

An article titled “Motion Picture Theatrers” in the September, 1914, issue of The Ohio Architect, Engineer and Builder not only mentions the Waldorf Theatre, but includes a floor plan, a sectional drawing, and a photo of the auditorium. The architect of the Waldorf Theatre was Ralph M. Hulett, of Cleveland, who was also the author of the article. The article says that the Waldorf was located in an existing building that was remodeled into a theater.

Here is a link to the illustrations.

Here is a link to the article (the entire volume of the magazine will open, so beware if you’re on a slow connection) which features two other theaters of Hulett’s design: the Empress Theatre in Akron, and the Reel Theatre in Cleveland (if those houses are listed at Cinema Treasures, they must be under later names, and are missing the aka’s.) In addition there are several drawings and plans of unnamed theaters, apparently intended as examples of the sort of designs the firm could provide to prospective customers.

There’s also a photo of a house called the Spreckles Theatre, also apparently designed by Hulett, but I’ve been unable to discover where this was located.

An earlier issue of the same magazine, from June, 1913, featured a portfolio of the work of Ralph Hulett which included this photo depicting the facade of the Waldorf Theatre.

A 1920 book of cases decided by the Ohio Court of Appeals included a case for the dissolution of the Waldorf Amusement Company. The text reveals that the corporation was chartered on May 10, 1913, and says that “From its organization the corporation operated a motion picture theater at 47 South Main street, Akron, Ohio, under the name of The Waldorf Theater Company.” The corporation leased the Waldorf, so the building must have been completed about the time the operating company was formed. Apparently the dissolution of the company was the result of its loss of the lease.

There is a Spreckles theatre in San Diego.

There is an article in regards to the opening of the Waldorf in the “Akron Beacon Journal”, 6/18/1913, page 3. Wasn’t able to copy the article but if you have newspapers.com you’ll be able to pull it up. If I find a way to download, I’d be happy to add! Thanks for the link to the Ohio Architects and Builders journal!