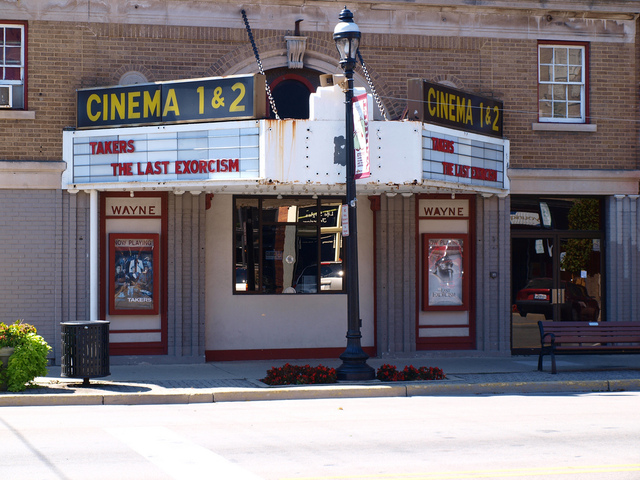 The last surviving movie house in Greenville. A renovated former live theatre built in the 1920’s and owned by Tony Macci. It had converted to movies by 1941, when the seating capacity was 460. It was split into two smaller theatres, each with 120 seats, in the late-1970’s or very early-1980’s. It was closed by 2014.

I’ve found references to the Wayne Theatre as early as the November 9, 1935, issue of Boxoffice Magazine. At that time, and for many years after, the Wayne was operated by A. Macci & Sons. Members of the Macci family are mentioned in connection with the theater as late as 1953.

The February 3, 1975, issue of Boxoffice says that John Tabor had acquired the Wayne Theatre and Speedway Drive-In at Greenville. The item does not say whether or not the Wayne had been twinned yet.

A couple of issues of Movie Age from 1929 mention a National Theatre in Greenville. That might have been an earlier name for the Wayne or the State.

There was a house on the site of the Wayne Theater that was torn down in 1920. The theater was built shortly after that. I think it was originally a live theater. I don’t know when it was twinned because I moved away from Greenville in 1970. So sad to see it’s just a shadow of its former self.

The National Theater, according to a 1910 Greenville directory, was about 3 blocks north of the Wayne. The State Theater was actually on 3rd Street, about a half block off Broadway.

I saw many movies in both the Wayne and the State.

Strangely, though, the photos are captioned as “Former Wayne Theatre…” The films on the marquee are current, so it appears to be very much open.

A 600-seat theater called Trainor’s Opera House was listed for Greenville, Ohio, in the 1906-1907 edition of Julius Cahn’s Official Theatrical Guide. It must have been the theater the Wayne replaced, according to the above comment by Pens. If the opera house lasted until 1920, odds are good that it, too, ran movies for a time.

Yes, but now it’s called the Wayne Cinema, or just Cinemas 1 & 2. I went with the old name.

Wonder how many twin theatres are still out there,and Showing First run.

The Trainor Opera House was on W. 3rd Street. It ran movies for awhile, I don’t know for how long. It burnt down in 1926. It was replaced by the State Theater which was demolished in 1981. The Wayne Theater is definitely still open but as a very nondescript twin.

If it burned in 1926, it’s possible that the Trainor Opera House had become the Strand Theatre which, according to the November 27, 1926, issue of The Piqua Daily Call had been completely destroyed by a fire the previous night, along with an adjacent building. The fire was caused by the explosion of film in the projector. The Opera House was built by the I.O.O.F. in 1873.

According to their website all Teicher Theatres are closed.