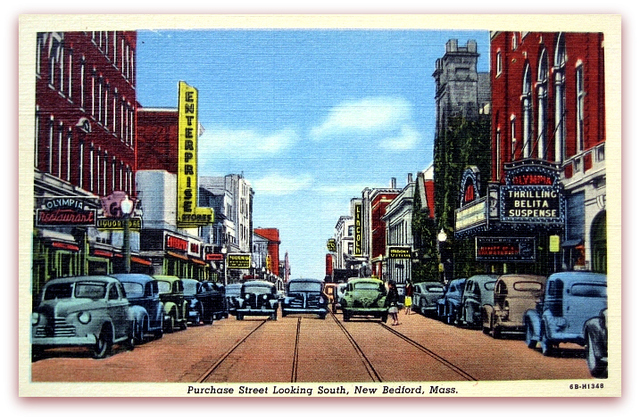 One of the numerous movie theatres that used to exist in the downtown New Bedford area. The Olympia Theatre was opened April 2, 1916.

Thanks for the quotes from Carmen Maiocco’s booklet. Just to set the record straight; The long time Manager was Morris(not Maurice) Simms who came to New Bedford from Brocton Mass. The Saturday Morning Kiddie Revue was not his idea. It was a live radio show that used the theatre as a venue. I can’t recall the station call letters, but the managers name was Ed Bogoshian. If there was ever a ‘dish night’ at the Olympia, it had to be in the 40’s not the 50’s. And Ushers were never allowed to accept ‘tips’ from patrons. The Baylies Bros. built the theatre and Theodore Baylies was its first Manager.The original pit orchestra was led by A.Karstein.The huge stage measured 94'wide,36'deep and 64'high

The silent classic “Down To The Sea In Ships” was shot in New Bedford, and The World Premiere held at the Olympia in February 1923.
In 1950, Stage Manager, Walter Seaman showed me 8x10 sepia photos of the Premiere. They came from an old 4-drawer file stored in one of the six downstairs Dressing Rooms.The file was packed with records and photos from the Vaudeville days.Was this file salvaged before Zeitz demolished the theatre? I also interviewed Tillie Bourne of 245 Walnut St. Clara Bow lived with her while shooting the movie. Tillie was 80 in 1950..Had no photos, but great stories, and a program book from the night she attended the “Star-Studded” Premiere.

CORRECTION. “Down To The Sea In Ships” had its Nationwide release in February 1923. The World Premiere was held at The Olympia New Bedford on September 25, 1922.

The Theatre Historical Society listing for the Olympia in New Bedford, compiled by CT and THS member Barry Goodkin, states that the house opened on April 2, 1916 and was designed by Wm. Mowll of Mowll & Rand architects. It had at least 2300 seats.

In the October 30, 1961 issue of Boxoffice Magazine, an ad was run showing how many mainstream theatres were showing Federico Fellini’s La Dolce Vita, a subtitled Italian movie. This theatre was one of those. Link to ad, then expand:
View link

Photos of the Olympia and other New Bedford theatres can be seen in this great set:
View link

The Olympia is listed in the 1927 Film Daily Yearbook as having 2300 seats and open daily.

From the 1940s a postcard view of Purchase Street along with the Olympia Theatre in New Bedford.

A July 1, 1916, article in The Moving Picture World reported on the Olympia Theatre and noted that it was the first theater ever designed by architect W. L. Mowll.