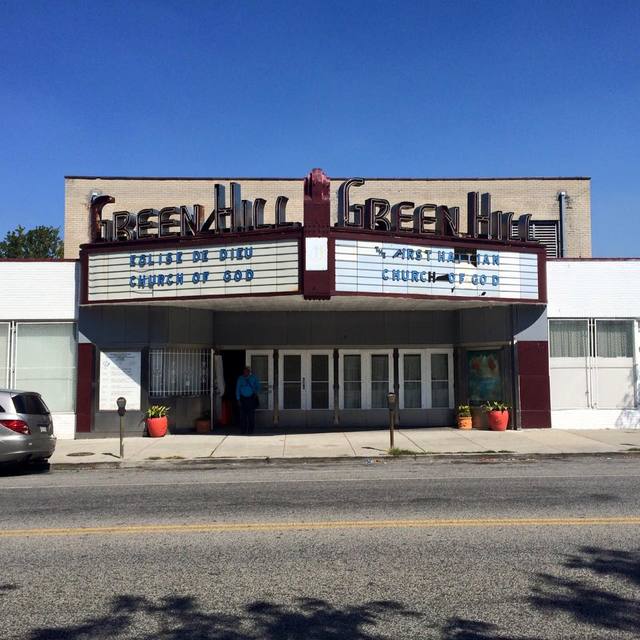 I took this photo of the Green Hill while driving by in January 2004.
View link

The theater closed in the middle 60’s. After it closed it operated as a bingo hall.

Don’t laugh! Years ago 1958 to be exact my boyfriend (now husband) and I used to go to the Greenhill to see the “Carry On” British films. We thought they were hysterical. Anyway, one particular night during the movie, my “boyfriend” put his arm around me. In no time the usher sauntered down the aisle, tapped my “boyfriend” on the shoulder and said, “We’ll have none of that.” We laughed all the way home.

The Green Hill specialized only in British comedies during the 50’s (possibly even earlier). Lots of Terry Thomas, Peter Sellers, and, as mentioned above, the “Carry On” series. House was basically the only Philadelphia house to run British films until the downtown Trans-Lux latched onto “The Mouse That Roared” in 1959 which ran for weeks on end, after which time distributors were more prone to book UK entries into center city houses.

Great theatre for funny/satirical British films. Worked there 1957-1962 for .50/.75 per hr. The owners were two bachelor brothers that selected the feature, short subject and cartoons very carefully. The movies ran until the audiences dwindled. I’m All Right Jack ran about 6 months, if my memory is good. I also liked Man in the Cocked Hat with Terry Thomas. We were instructed to break up those necking, but not those with arms around shoulder.
Oddly, there was no concession stand which upset many people over the years.

Here is an item in Boxoffice magazine, October 1963:

PHILADELPHIA-The Greenhill Theater has been selected as site of the American premiere of the new J. Arthur Rank comedy, “A Pair of Briefs”. The date for the premiere is October 16.

The church is still there, according to Google. It doesn’t look very good, though. The marquee is missing some panels.

Here is what the church looked like a few years ago:
http://tinyurl.com/ygtu2e6