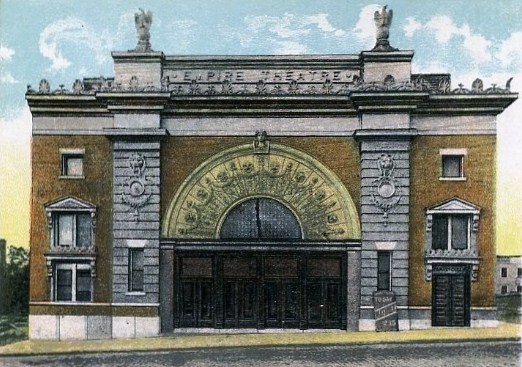 Just a small correction, on that page it lists the Empire as easily accessible to visitors of Poland Spring. There wasn’t one in Poland. Also, in my 47 years I never saw the theater resemble that postcard. None of that ornamentation was there when I first saw Bambi at age 4. I don’t know how long ago it was stripped off, but it had been a blighted eyesore for decades before it was torn down. it’s not the fault of the people who tore it down, it’s the fault of whoever took off the facade 50 or more years ago.

I saw the film “Rocky” here in late July 1977 for 99 cents, with a few co-workers of mine, on my first job, a summer job, with the U.S. Army Corps of Engineers.

I get my 30 year plaque or pin from the Corps of Engineers tomorrow.

Does anyone have any pics of the inside this theatre?

In the 1942-43 Motion Picture Almanac, the Empire, along with the Music Hall,Strand and Priscilla in Lewiston, was being operated by John Ford, an affiliate of Paramount Theatres.

Is the Empire Theater still standing ? If so, what is it now used for ?

I’m from the area and can tell you a little bit more.

The address for the Empire Theater on the page is incorrect. The location was actually 137 Main Street, Lewiston, ME. It was demolished in 2005, but if you go to Google Street view on the actual address, you can see a parking lot where it once stood, surrounded by other buildings, which outlined the former theater.

Excerpt: “The Empire Theatre was built on Main Street, Lewiston, near the canal in 1903. Staples remembers the spectacular opening night when “patrons attended in full evening dress, bejeweled and resplendent.” The opening night’s play was “The Yankee Consul” with Raymond Hitchcock, a reigning Broadway star who brought his own orchestra.

Another news story from the year the Empire Theatre was built described its ornate style.

“The theatre has a seating capacity of about fifteen hundred,” the article said. “There are 592 seats on the ground floor, 367 in the balcony and 500 in the family circle.” Also described are the eight box seats with seating for 44 people.

“The carpets are red except in the ladies’ room, which is handsomely carpeted in green and has furnishings to harmonize,” the news story reported.

“The stage is large and well arranged, there are 12 dressing rooms at the right of the stage, all of which are supplied with the most modern conveniences, including electric lights and running water.”

It was not many years ago that the Empire Theatre closed, and many area residents will recall the structure much as it was described in 1903. It was demolished just a few years ago."

Thanks, bosox4life25, for this info.

This piece about the Empire Theatre (linked earlier by lostmemory) says that “New York architect, Claufflin, designed the new house.” Maine Memory is the only web site that makes any reference to a theater architect named Claufflin, and I don’t find him mentioned in any periodicals of the time.

I suppose that they must be referring to Fuller Claflin, the somewhat peripatetic theater architect who was practicing in New York City at the time the Empire was built. He had previously worked in San Francisco (1890-1895), and would open an office in Detroit in 1909.

The Theatre Historical Society archive has the MGM Theatre Report for the Empire, it’s Card # 391. There is an exterior photo taken May 1941. Address is Main St. Condition is Good. It says the theater is over 15 years old and is showing MGM product. There were 840 orchestra seats and 496 balcony, total 1,336. The 1940 population was 38,500.

Further evidence that Fuller Claflin designed the Empire Theatre appears in the September 22, 1903, issue of the Lewiston Evening Journal. An article said that the Amalgamated Theatre Company had resumed work on the new theater on Main Street. Amalgamated was the New York design and construction firm headed by Claflin.

An article in the February 4, 1961, issue of the Evening Journal said that the Empire Theatre had opened on November 23, 1903.