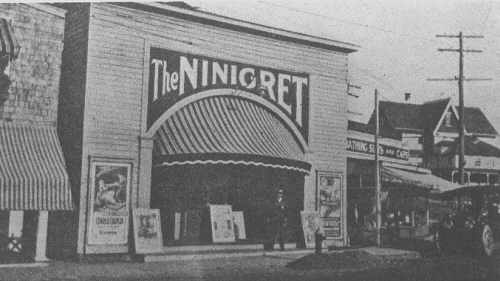 Located in the center of the summer colony of Watch Hill, near Westerly, the Crown Theatre was in operation in the first decades of the 20th Century.

The 1949 Film Daily Yearbook lists the seating capacity as 300.

This theatre appears to have been in operation only seasonally, to serve the summer influx of vacationers and summer residents.

See my photos of this building at http://www.cinematour.com/tour/us/15609.html

My late friend, Jeanne McPartland, played piano for silent films there in the 1920s. She continued to accompany silents through out her life, and played for many of the programs I produced in CT. She talked about a Fairbanks film shot in the area which was shown locally as a thrill for residents. There were people who went to the screenings who had remembered the film when Fairbanks shot it. One woman was actually in the film. She had many interesting things to retell about her experiences. I do miss her a great deal.

Galen, if you can add more please do.

Thanks for the story Galen.

You’re most welcome, guys. I found that the Fairbanks film Jeanne played for that was quite a local event was American Aristocracy. It was shot in Watch Hill in 1916. Fairbanks and his entourage arrived on the 2nd week of Aug. to shoot the entire film there on location. I have regretfully never seen it, so I am hunting down a copy for myself. I recall her telling me about a scene where a local woman drives by in an auto and Fairbanks does a stunt where he jumps into the seat of her car. It was quite a hit with the locals, naturally. During the 1970s she accompanied the silent film programs I produced in S.E. CT. Many people came because of her playing. I regret not making a tape of her. But she forbid it. I should have snuck it one evening. She was one of those wonderful people who brought the silents to life! And this is where she got started, at the Ninigret.

Sadly it appears this former theatre has been demolished and the condos have been built.

change status to “demolished” too

How very sad, Roger. I always wanted to go back and take some pix. That will never happen now.