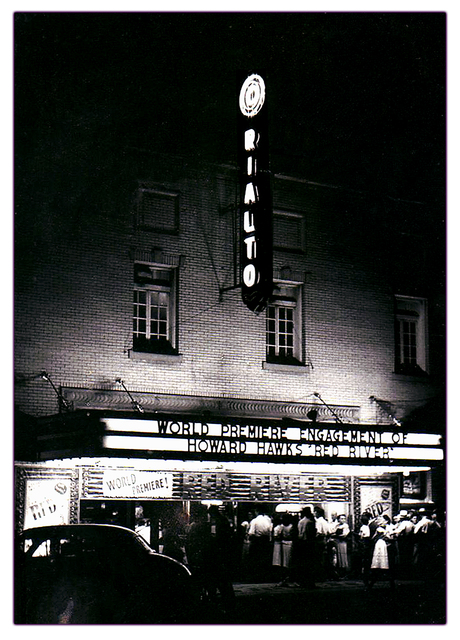 The largest theater in the small town (about 20,000 population) of Denison, it was the first run movie palace in the city from the time it was built in 1920, and it opened on August 4, 1920, billing itself as “Denison’s All-Time Greatest Movie Palace”. It was built by L.M. Rideouton but was sold to the Interstate Theaters chain in 1935. On August 25, 1948 the World Premiere of Howard Hawks western “Red River” starring John Wayne was held at the Rialto Theater. Interstate operated the theater through the 1960’s, but by the time it closed in August 1977, it was locally owned.

It had a revival in the early-1980’s, again showing first run films, but the local owner could not compete with the multi-theater located in a nearby shopping mall. Sometime in the 1990’s, the Rialto Theater was turned into a concert setting and is still open today — balcony and all — and weekly live country music shows are staged there.

RED RIVER RETURNS TO DENISON
Trying to capture a little of movie hey days of the past, Red River
returned to the Rialto at Denison on a cool evening, March 18, 1982.
The event generated a little bit of excitement as quite a number of oldtimers reminished about the night 34 years earlier.
The celebration was a far cry from the original, however Denison’s leaders were a different breed, displaying a lack of concern for a
historic occasion of trying to bring back the Rialto’s golden years.
The Classic Red River itself had become relic, ragged and old.
Most in attendance wondered why they were not at home seeing it on
television. Billy Holcomb
television.

A photo from August 25th, 1948 of the Rialto Theater in Denison featuring a world premier engagement of “Red River”

“Red River” returns to the Rialto in 1982, 34 years after its world premier in Denison.

A great book detailing the history of all 30+ of Denison’s movie theaters is THEATER ROW: MOVIE PALACES OF DENISON, TEXAS, by Billy Holcomb (Denison Heritage Inc., 1999). Has a whole chapter on the Rialto. Over 100 photos. Epilogue by Donna Hord Hunt.

Was in Denison this week (11-22-10) & Sadly, the RIALTO is now closed. I’m going back Next Monday (11-29-10) to get some updated shots of This Theatre & some other Stuctures as well. See if any other Former Theatre Structures are at least still standing, using the address’s that are on this site.
Randy A Carlisle
Historical Photographer
RAC Photography

The Rialto has been remodeled and is having it’s sold out Grand Opening Premiere this Valentine’s Day 02-14-2012: showing Dirty Dancing.

Same photo as the one above Randy A Carlisle – Historical Photographer

Hi there everyone. I’m the current manager of the Rialto and I just wanted to let you all know that we are open and running once again. I found this page as I was researching the theater and its history.I would love if anyone who has photos, stories, and/or inquiries for the theater get back to me at