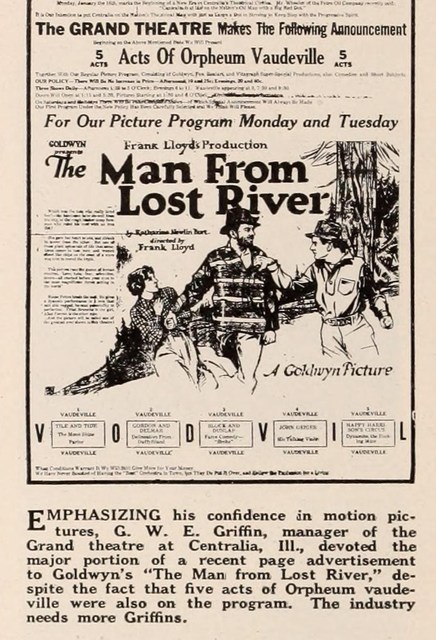 The Pittenger Grand Opera House was first built in 1900, destroyed by fire, and rebuilt in 1901 with the support of the citizens of Centralia.

It was the largest, most elegant theater south of Springfield with 1,200 seats, over 800 electric lights, a crude air conditioner, and perfumed air (to match the theme of the performance). The first moving pictures flickered at the Pittenger Grand opera House in 1905. In late-1913 it was renamed Grand Theater. The first “talkie” in Centralia was shown at the Illinois Theater in 1929.

The Grand Theater was demolished in 2002 per the Centralia City Council meeting minutes dated January 14, 2002.

I remember this place – sad to see it go!

The grass-covered site of the Grand Theatre is roughly across the street from the building currently occupied by Byrd Watson Medical Equipment, which is at 123 N. Locust. The Grand’s address was probably about 124 N.Locust.

Appears on the 1902 map as Pittinger Grand Opera House. That name seems to be a misspelling. Address was 128. Originally, there were three storefronts (sharing the address of 124) with the entrance on the north end. A wooden awning extends the length of the building.

The original structure may have been a conversion of a large brick building that occupied nearly an identical footprint. It appears on the 1886 map as a skating rink, and was then a fruit drying warehouse and a box factory. It was only one story.

On the 1924 map, it is still shown as a opera house, with stage and scenery. A dressing room section has been added on the rear of the south side, and the awning has disappeared (sometime after 1916). The stage was very deep, and the balcony was a large horseshoe. The address for the entrance is now 132.

Late 1913 is likely when George Pittenger began billing the Grand as a theater rather than an opera house and began showing movies regularly. The January 3, 1914 issue of The Moving Picture World said that “George Kleine’s ‘Quo Vadis’ was the attraction at the grand opening of the Pittenger Grand Theater, at Centralia.” The house was listed as the Grand Theater in the 1914-1915 American Motion Picture Directory.