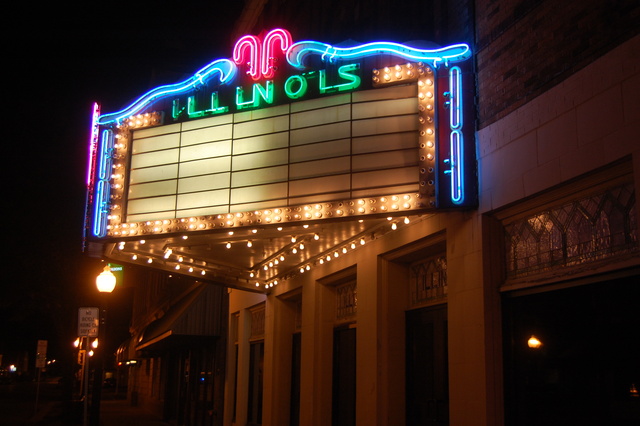 The Illinois Theatre, located on Locust Street, was opened on January 16, 1922. By the 1940’s it was operated by Fox Midwest Theatres. Frome the late-1970’s until the early-1990’s it was operated by BAC Theatres. Kerasotes Theatres then took over. After Kerasotes Theatres opened the Plaza 5 Theatres in Centralia they closed the Illinois Theatre in December 2001.

In the fall of 2004, Kerasotes donated the Illinois Theatre to the city of Centralia for future use as a live venue. Renovations to date include the relighting of the marquee and the interior of the entrance lobby.

Good Luck with the renovations. I hope you are able to open and find success. Hart Theater in Effingham and Plaza Theater in Mt.Vernon are also struggling. Maybe a special theater-owners group should be formed to share information with each other?

For a photo of the Illinois Theater that I snapped while visiting my hometown in late 2006, click http://pics.livejournal.com/dabroots/pic/000b05g3

Great news that the city preserved this theatre. The inside is impressive and was well-maintained. A diamond in the rough no doubt.

Going back 31 years… the Illinois was showing the following:

From 1929 into the early 1940s, the Centralia Evening Sentinel usually refers to the house as the Fox Illinois Theatre.

The American Contractor of March 26, 1921, carried a notice about a project that was probably the Illinois Theatre:

The correct name of the architectural firm was Gill & Fath, who also designed the Rodgers Theatre at Carbondale and Marlow’s Theatre at Murphysboro. Rudolph Zerses Gill was a well-known architect in the region, and several of his buildings have been nominated to the NRHP. I’ve been unable to find any information about Mr. Fath.

Some Historical Facts about the Illinois Theatre:

First opened in 1922 as a Vaudeville Theatre.

In 1976 BAC renovated the building in blue and silver at a cost of $250,00. It was also at this time the Illinois became a twin.

In 1980 Kerasotes bought the building and operated it as a movie theatre until December 2001.