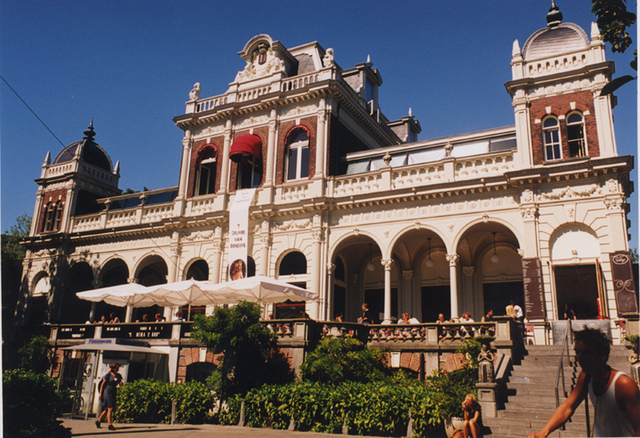 This was the Dutch equivalent to the National Film Theatre in London, England, where classic films from the national archives were screened to the general public.

Here in Amsterdam it was housed in the Vondelpark Pavilion, an Italian Renaissance style mansion designed by architect W. Hamer in 1881. The building has a large elevated veranda and three gracefully decorated dining rooms which include a ‘French Room’ in a Louis XIV style and a ‘Japanese Room’.

The building was taken over by the City of Amsterdam in 1953 and was rented out to the Holland Festival. In 1973 the Film Museum moved in and screened their programmes in two of the rooms since 1974.

In 1991 the building was radically altered and during the renovation an original cassette ceiling was discovered in the 60-seat auditorium.

In the 80-seat auditorium, the entire interior of the former Cinema Parisien in Central Amstersdam was taken out of that building prior to demolition and installed in the Vondelpark Pavilion. The original Cinema Parisien (which ended its life as a sex cinema) was originally opened in 1910, had 804 seats and was designed by architect Jos Hegener. It was re-decorated in an Art Deco style in 1924 under the guidance of Dutch film pioneer Jean Desmet. It is this decoration that is now currently on view at the Film Museum.

The other large room at the Vondelpark Pavilion is still in use as a dining room, being the Film Museum restaurant/cafe and there is also an extensive film/cinema orientated library. In around 2010, it was re-named Eye Film Institute Nederlands.

This facility closed after a new film centre, a brand new EYE Film Institute was built on the north side of the river IJ, in Amsterdam, which opened in April 2012. The former Art Deco style Cinema Parisien interior was removed and installed in Screen 7 of the new Filmhallen multiplex which opened in September 2014.

According to the official website, the Film Museum is moving in 2010 to a new building that will have more auditoriums including a 300 seater. I hope they either move the ornate auditorium or keep it in good use where it is. I liked seeing movies in the ornate mansion in the Vondelpark.