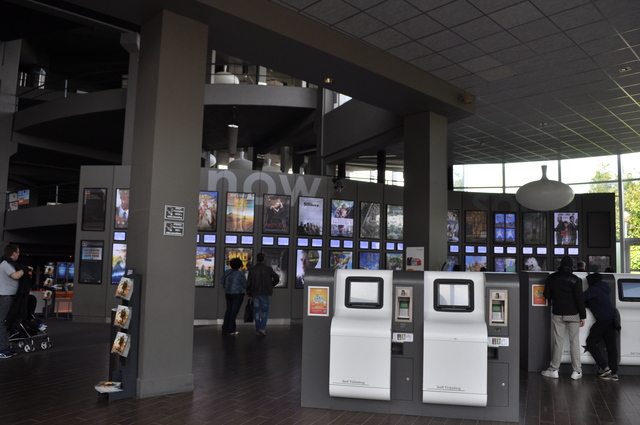 The Kinepolis is the largest multiplex in Brussels. One of the 25 screens is an Imax presentation and all screens are THX certified.

Located in a Brussels suburb, it opened in September 1988 and is built as part of the Brupark amusement park which also includes the Oceadium (an indoor swimming complex with saunas and solarium), a model village and a model Europe set in miniature which can be walked through.

The figures I give in the opening comments were correct in September 1995 when the Cinema Theatre Association(UK) visited the building.

Maybe Kinepolis have reduced the number of screens by 3 in the intervening years?

Oh! So maybe they added some screens!

There are 25 screens including the Imax —where regular (non-Imax) movies are shown, by the way—, but they are numbered from 1 to 27 : screens 7, 14, 21 are missing due to change of plans during the construction of the complex (small planned theaters were replaced by larger ones).

According to the Kinepolis website there are now 24 theaters for 6827 seats — I assume they closed the Imax theater.

The IMAX screen, with 600m2 (one of the) the largest in Europe, unfortunately was closed at the end 2005, just before they could’ve made some reasonable profit off of the IMAX DMRed films and U23D and such. I found out as I’m in Brussels now and wanted to see THE DARK NIGHT in it’s partly native IMAX format.. what a shame..

Features 24 screens in operation, on two levels. All screens offer stadium seating. Screen surfaces of the largest cinemas are comparable with IMAX theatres, although the aspect ratio differs and the distance to the screen is larger. Smaller screens still have quite respectable screen sizes.

Considered to be the first “Megaplex” in the world, when it opened in 1998. It is also the company headquarters.

Most other Kinepolis cinemas look strikingly similar to this one, which served as a template for the others.

The Architect is ESTE, a long term partner of Kinepolis. ESTE also lead the renovation of the interior in 2001.

The IMAX screen was closed in late 2005. It was already closed for regular screenings in 2004. Some of the signage is still present, as is the IMAX lounge, including the signage.

It conforms to the common Kinepolis standards, which practically apply for all their other multiplexes:
– All screens are THX certified
– Most (if not all) screens feature Digital Cinema gear by Barco and Dolby.
– Remarkably spacious seating for a large Cinema chain
– Features at least one screen that offers Dolby 3D

The theater has always had 24 normal cinema screens. The seat count was reduced because of the closure of the IMAX screen and a few might have been lost or added after several renovations and the introduction of a new seating system.

Kinepolis Brussels is quite special in it’s situation, as it is the only Kinepolis on real bi-lingual soil. It offers two versions of most mainstream movies: The original version with Dutch and optionally French subtitles, the French-dubbed version (if available) and a Dutch-dubbed version (mostly for movies targeted at children and if available).

Few photos of exterior, lobby and auditorium from June 2009.

The IMAX screen has reopened and is equipped with IMAX’s laser projection system.