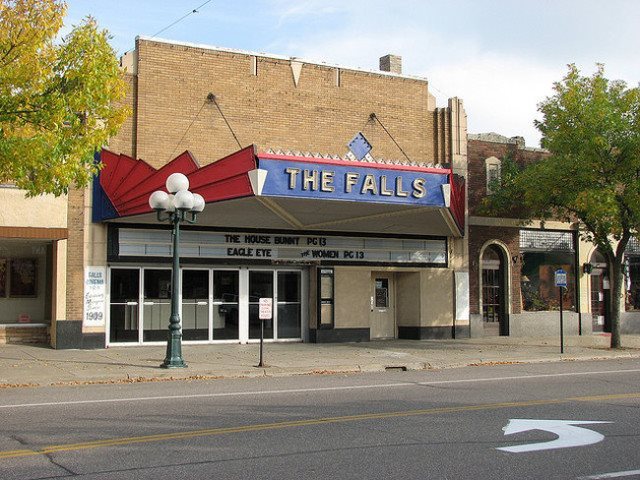 The exterior features flashing neon lights, black Vitrolite highlights the marquee and around the poster cases of the lobby.

After a couple remodels it was again remodeled in 1937 to reflect the 10th anniversary of Charles Lingbergh’s trans-Atlantic flight. Charles Lindbergh was from Little Falls. The theatre was given an aviation theme. A mural of an aviator holding, a globe, an airplane and a dirigible.

In its last remodel it was triplexed and was renamed Falls Cinema. It was closed (temporarily) on July 16, 2020.

Photo & history at this link:\
http://www.mnfilm.org/fun/mn_falls.asp

Showtimes has disappeared for this theatre in 2010. Is this closed?

According to their facebook page they are still open.

The April 8, 1933, issue of Motion Picture Herald said that a 750-seat theater was being built for the Lowell Theatre Company at Little Falls, Minnesota, to a replace their house that had been destroyed by a fire. Plans for the project were by Liebenberg & Kaplan.

According to the Facebook page, 2 of the 3 screens are digital.

Just tried the phone number, its been disconnected. According to their Facebook page, their last day of operation before an unknown length of “temporary” closure was 7/16/2020. When I was in Little Falls MN this summer, the theater was still closed, and the marquee said “Closed until…. hollywood….”