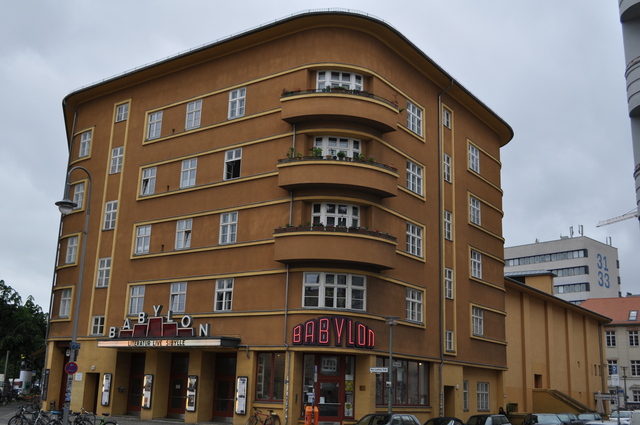 The main facade of the building contains an apartment block styled in a sleek ‘modern’ style with sweeping horizontal bands that lead to corner balconies. The great cinema and theatre architect Hans Poelzig designed a simplistic styled auditorium that is plain and has no decorative features. The original seating capacity was for 1,239 in orchestra and balcony levels.

Located in the Mitte district of what later became East Berlin, the Babylon Kino opened on 11th April 1929 with the silent film “Fraulien Else” and a ballet “Alexander Oumansky” was performed on the stage. The leading Dutch organist Pier Palla played the opening concert on the Philipps 2Manual/14Rank organ.

The cinema survived the World War II intact and after the war, during the Soviet Communist period, it became the premier house for showing films by Sovexport and films made in the DDR. By the 1960’s the cinema was still in daily use but the organ had been abandoned, with the console stored in the orchestra pit and the cables cut. The orchestra pit was boarded over and the proscenium opening hidden when a large wide-screen was installed.

By 1992, through lack of maintainance, only the orchestra seating area was being used (428 seats). It was in 1993 when disaster struck, as part of the ceiling started to collapse and the auditorium was sealed off as it was deemed unsafe for public admission.

The cinema continued by using the foyer as a 67 seat screening room and this continued until 1999 when the cinema closed for a total re-furbishment.

In 2001, it re-opened as the Babylon Filmkunsthause, now containing a 2nd screen, built on the former stage that has 68 seats and has it’s own seperate entrance at the rear side of the building. The main auditorium has been refurbished with 385 seats in the orchestra level and 52 seats in the balcony. The original Phillips organ was also re-furbished and is used on a regular basis to accompany the silent movies. The organ is now the only one in Germany that is in its original installation, still in regular use.

It has now reverted back to its original Babylon Kino name, with the district name ‘Mitte’ included, to avoid confusion with the Babylon Kino located in the Kreuzberg district of the city. By 2015 a 70-seat third screen was added at the rear of the building.

More infos and photographs on this theater (and many others) can be found on the German language only Berlin Movie Theater Guide – www.kinokompendium.de: Babylon Mitte

Here is a You Tube featuring the Philipps 14-ranks pipe organ.