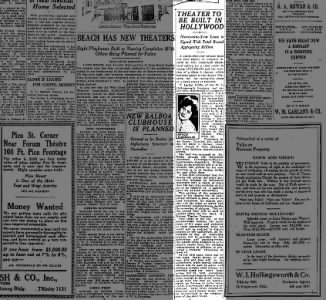 Also I remember seeing capricorn One!

I saw a horror movie here when I was a toddler! Blue Sunshine! 1976!

I worked as projectionist at the World in the late 60’s. Besides the triple bills, sometimes Universal would rent the theater for preview screenings, and would send their sound guys out to set up the double system sound machines.

Once we ran Willard and Ben on the same bill, and I persuaded the manager to let me cut the tail and credits out so it played as one continuous movie. Another time we were running Black Beauty, and the last day an audience member pointed out the reels were out of order. I checked the leaders and indeed they had been mismarked and we had run it that way all week.

You can see the World marquee lit up and impressively animated at the very end of this Hollywood Blvd. footage from 1967: http://www.youtube.com/watch?v=dBmaX64TWSw

Lots of comments here re. how much the admission charge was at the World. I was a regular there from 1972 to 1986, so I can only speak for those 14 years or so.

I do not recall any $1.00 and $2.00 admission charges during this period at the World Theater.

Okay, I used to go here from 1972 to 1986. They always had free parking just west of the theater itself in the back, and admission prices for the three movies were 99 cents, i.e. 33 cents per film!

I am reading comments here how “cheap” the admission prices were in the early 1980s, when you could get in for $2.50. Well, maybe, but I tell you, after prices jumped from 99 cents to $1.50, I went there less often, and when it went up to $2.50, I went there even less frequently. I went there EVER WEEK while prices were 99 cents, and never had any bad experience there at the World for the 14 years I was going there. The place was always well run, after a while you began to recognize the other regulars. I used to take a sandwich and an apple with me, as you could easily spend six hours or more in there for the 3 back-to-back flicks. It was really the cheapest place to stay out of trouble (and out of the rain or sun) in Hollywood.

Remember seeing Roger Moore in “Gold” here in 1973, and I also believe I saw “Fear is the Key” (Alistar Maclean actioner) with Barry Newman here in the previous year.

Last time I was there was just before they closed in the summer of 1986, I believe. I moved out of California in September of that year, and have only been back there occasionally on short visits. We thought Hollywood was “bad” then, but nothing prepared me for the total economic melt-down in Tinseltown, in fact in most of once high-flying California. Seems like every bldg on Hollywood Blvd has a FOR SALE or FOR LEASE sign on it these days, wow.

I am confused because my memories of this theatre and the block it was on are from my early, early youth in the 70’s. Anyone else who might know, please comment as I have subscribed to this page. I remember Capricorn One! I was probably 6 years old. Remember I wanted to see North Dallas Fourty but my Mom’s boyfriend adamantly warned me that it was not the fun cartoonish film the poster made it look like. Okay but the earliest memory was, and this is where I get confused if this was in fact at the World theatre or the Hawaiian theatre down a ways towards Bronson—which is what I believe is the spot I saw that crazy obscure horror film called Blue Sunshine! A babysitter took me and it traumatized me for weeks!

I remember this one for the triple-features they always had running. It was the east-most movie hall on ‘The Boulevard’, I think. I remember seeing Master of the Flying Guillotine there. Fond memories.

Hi Dean, I was one of the Asst. managers there at the time. Lisa was the other asst. manager.

William, I did train at Pacific’s Picwood Theatre and my name is Dean. Do I know you?

My Father managed The World in the early 80’s. His name was Tom Kalcoff. It has been fun reading the posts. Some former employees are on here around the same years my Dad managed the place. I remember seeing the first showing of Friday the 13th there. I wonder if Diana and Dean were brought on by my Dad when he left? Anyhow.. great memories from The World Theatre.. they don’t build them like that anymore.

Wondering if anyone knows if there has ever been a movement to reopen the X-Twin theaters? It just seems an ideal spot for a theater to be revived.

dmccrea, Did you train over at Pacific’s Picwood Theatre? And your name is Dean?

I managed the World in 1980-1981. I read some of the comments above from people that worked with me. I remember the martial arts movies, the great people that I worked with and all of the craziness that came along with the World. I remember oversleeping one day, waking and realizing that the theatre should have been opened an hour earlier. I rushed down to find that one of the employees had kicked in a window that allowed them all to enter, set things up and opened on time. I was surprised.

I remember being called into the auditorium one evening to break up a fight. I discovered that a man had been very carefully cutting off huge lengths of hair from the head of the lady sitting in front of him. He had done this largely unnoticed. However, the lady did eventually notice as did her boyfriend and that began the fight.

I had moved from Portland, Oregon to manage the World Theatre (long story). I was quite unfamiliar with LA ways. On my very first day as manager I stayed late and gave both bathrooms a couple of coats of fresh, white paint to cover wall-to-wall graffiti. When we opened the next day my Asst. Manager, looking terribly grief stricken, asked me if I knew what I had done? Of course I did not. But he explained that by painting over all the gang graffiti I had essentially claimed that I had retaken the theatre from some gang. He told me that before the shift was out gang graffiti would reappear and he begged me not to remove it. It did reappear and I left it as it was.

I loved working at the World. I had an amazing crew that taught me a lot. I loved the steady parade of characters that came through each day. I loved being on Hollywood Blvd, day and night. I just now ordered some pictures of the World Theatre (circa early 80’s) from a link posted above. I will frame them and hang them above my desk.

The World can be seen adjacent to the X in this 1982 photo:
http://tinyurl.com/nexa95