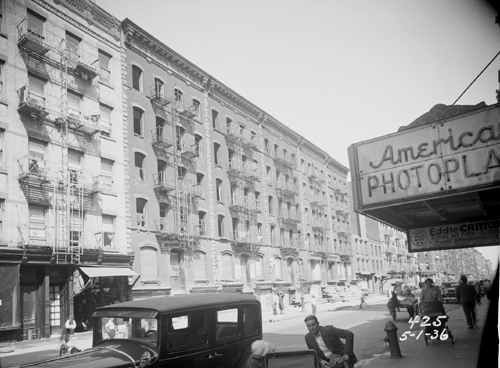 The American Photoplay was on E. 3rd Street on the lower East Side of Manhattan situated in the middle of the block among tenement buildings in a low-income area. It was opened by 1922 and was operated by Charles Steiner. By 1931 it had been renamed American Movies.

In 1957, I worked a Summer job as a day camp counsellor for Christadora House, a non-sectarian organization that helped out the needy and provided day care for children 6 to 10 years old for working parents or single parents. In August of that year, we had been having rain for three days straight and the kids were getting cabin fever, so to get them out of the basement area of the building the Camp was housed in on Avenue D, my cousin Rose who was the receptionist suggested we take them to the movies. The closest was the American Movies on E. 3rd Street, plus the most affordable at about 20 cents a head. My cousin called the manager of the American Movies and told him to clean out all of the “bums” as we were bringing about 70 kids there, with rain-coats, umbrellas, we walked from Avenue D to E. 3rd Street and saw, “Sign of the Pagan” with Jeff Chandler.

The theatre, while being small, was bigger then some of the low price movie houses in my old neighborhood of Brooklyn, such as the Rogers Theatre. One thing remains in my mind, is that the screen was a painted brick wall, the size of a CinemaScope screen, and we were about the only humans in the place. That night I mentioned that movie house to my father, who was born on Elizabeth Street in Little Italy in Manhattan, and he told me he went there as a kid to see Tom Mix and Harry Carey westerns. My father was born in 1911, so I realized that the theatre was very old. But to my surprise, “Sign of the Pagan” was a color-scope film, and here it was being shown on a painted brick wall on the lower East side. Apparently it showed a better class of films than the old theatres in my old neighborhood did.

It was still operating as a movie theatre known as the American Theatre in December 1969, when the seating capacity was given as 299. In September 1991 it was converted into an adult physical culture club. The last years of its existence saw a use as a nightclub and live performance venue. It was demolished on March 28, 2019.

A few years ago, when the building was for rent, I tried to arrange a visit. Unfortunately, I was too late. The real estate agent told me that the building had just been leased to a theatrical company and would be used for rehearsals.

The architect of this theater is Louis Sheinart.

I lived in the East Village when I was about 11 years old on East 3rd Street between Ave B & C. We lived in an apartment on the 2nd or 3rd floor, and it was across the street from an old movie theater, and I think this must have been this theater. My sister and I both remember seeing the 1963 version of “The Haunting” there. One day the owner (or manager?) of the theater was standing 0in front of the theater and a Puerto Rican man asked him what time it was. The theater owner beat him in the head with brass knuckles and put him in a coma. I think I witnessed it from the fire escape of our apartment, or some of the reaction of our neighbors later. My mother told me later that what he did was a racist act.

Wow!! What a vicious act that was!! Imagine beating somebody within an inch or so of their life for asking an innocous question such as what time it was! Here’s hoping the theatre owner got put behind bars.

I like the marquee in the front of the theatre.

I grew up in the Lillian Wald House on E. Houston during the fifties and can remember going to the American Movie House on 3rd St.
We had all the sci-fi, horror movies of the time: Big Bugs, Aliens, etc. But also I saw the Ten Commandments there; along with a slew of cartoons: IN COLOR. That in itself was amazing since none of us had seen color cartoons before (only B/W Tvs existed). And there were three other theatres in the neighborhood: the Winston on Clinton & E. Houston, Lowes Delancey on Delancey & Suffork (next to Ratner’s) & the Academy of Music on 14th (next to LuChows). Imagine, all day movies and cartoons for 20 cents.

Can you remember how the theater looked inside? Did it still have an open roof construction?

The theatre was extremely small with the bathrooms just inside the door after you paid. A small balcony perhaps ten rows deep. Also a post office was on the block. And it was between Ave C & Ave B.

Thanks for this information. It means that they added a balcony at some point because the theater didn’t have that when it was built in 1914.

I lived on 3rd btw Ave B and C and also live in the movie house on weekends, lol. I saw every cartoon and movie of the time. It was .35 cents admission. I mother gave me a dollar and it was just enough to get candy, popcorn and a soda. I loved it