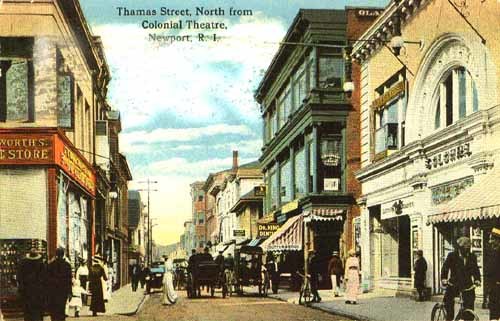 A vaudeville and film theatre in the early part of the 20th Century. The Colonial Theatre was opened February 4, 1911. It was operated by the E.M. Loews Theaters Inc. circuit from 1938 and was closed in April 1940.

It was converted into a Newberry’s store and today is an Express clothing store.

The Colonial opened on February 4, 1911, according to a card-file note at the Newport Historical Society.

An ad in the Newport Daily News on April 15, 1940 said that on Sunday, April 21 “the Colonial Theatre, with its entire staff, moves to the new E.M. Loew’s Paramount on Broadway.”

Here is a a photo of a flooded Thames Street after the hurricane that struck on September 21, 1938. The Colonial Theatre can be seen in the distance.

Thanks for posting the photos & bringing this matter to our attention. I don’t consider it a good example of adaptive reuse. When did the theater close, and when did it become Express? :(

The theatre closed in the early 1940s, I believe. It was a Newberry’s (five and dime) store for a long while. It became an Express only a few years ago with the trend toward upscale shops in the area, like the very inappropriate-looking Banana Republic next to the in-restoration Opera House around the corner in Washington Square. After 65 years or more, most Newporters don’t even know there was ever a vaudeville and movie theatre in the building that now houses Express.

Thank you! I take pride in knowing that its neighbor, Opera House cinemas, is undergoing a restoration at the very least.

Yes, sure is still there, as an Express store. I used to go there when it was Newberry’s and the interior still had some things, if you looked closely, that suggested a former movie theatre, something evident now only from the outside rear and side.

“E. M. Loew circuit took over operation of the Paramount, Newport, with manager Gerald G. Wagner and his entire staff at the Colonial moving to the Paramount. Colonial, occupied by Loew for the past two years has been sold to Miss Ruth L. Weiss of Boston and is scheduled to be torn down and replaced with a new $45,000 store for J. J. Newberry Co. According to Wagner, the same policy maintained at the Colonial will be continued at the Paramount; dual subsequent run features with added vaudeville on Sundays.”

[Note: the Colonial was not torn down but was converted to retail and became a Newberry store afterward.]

In September 1920, this theatre was part of the celebration of the 3rd annual Paramount Week. CLICK HERE for all participating RI area theatres and the titles of the films shown.