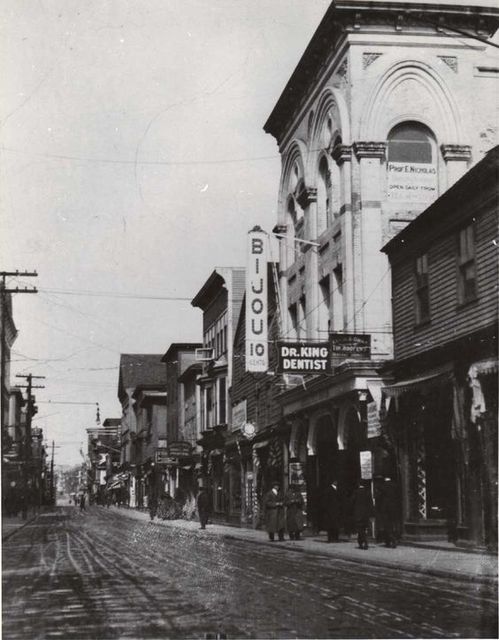 The Bijou Theatre was a vaudeville and movie house during the first two decades or more of the 20th Century. An old city directory ad placed by the theatre states “Fox Productions, Latest Motion Pictures”. It was located at 192 Thames Street. The Colonial Theatre was up further at 146 Thames Street.

Here is a link to a site with an old postcard showing the Bijou Theatre on the right.

And in this photo I took you can see that same spot today, 192 Thames Street. I cannot ascertain if anything of the original theatre remains. But I doubt it.

Here is another photo of the Bijou in Newport, taken in 1908.

Newport’s Three Moving Picture Houses.
That was the heading of an October 1908 article clipped from an unidentified newspaper. The Star, Bijou, and Empire were those three undoubtedly smallish movie houses. Tiny photos of the three theatres appeared at the head of the article which was saved in a Newport resident’s personal scrapbook, now at the Newport Historical Society. The article does not go on to describe the theatres pictured, but instead talks about the motion picture medium itself and how it works. Movies were still a novelty then, but one that was capturing people’s attention here as everywhere. It was enough to cause three theatres to pop up in a short span of time and dedicated to presenting them in the city-by-the-sea. The Lafayette/Strand and the Opera House were not movie theatres, and the Colonial, a movie and vaudeville house, would not open until 1911. The Paramount, Newport’s grandest and most beautiful movie theatre, would not open until 1929. A perusal of the Newport Daily News of the period did not show any ads for these theatres' programs. Business may have been drummed up through printed flyers or may have relied heavily on walk-by interest.

This theatre was part of the September 1923 6th Paramount Week. In this advertisement from the (Providence) Evening Tribune, September 1, 1923, we see a fascinating list of Rhode Island area theatres, many long-gone and long-forgoten, or even unheard of, as well as what they were showing during that week. Gloria Swanson in Her Husband’s Trademark was one of the titles shown here at the Bijou. CLICK HERE and move text to see all theatres.

Mayor Mahoney of Newport tells alien clergyman in 1922 he has no right to ask questions, one of which was “Have you withdrawn an officer from in front of the Bijou for preventing boys and girls under age from entering that theatre in violation of the law?"
Link to article in The Providence News:
CLICK HERE

This building still stands, but has had significant alterations including removal of the top floor.