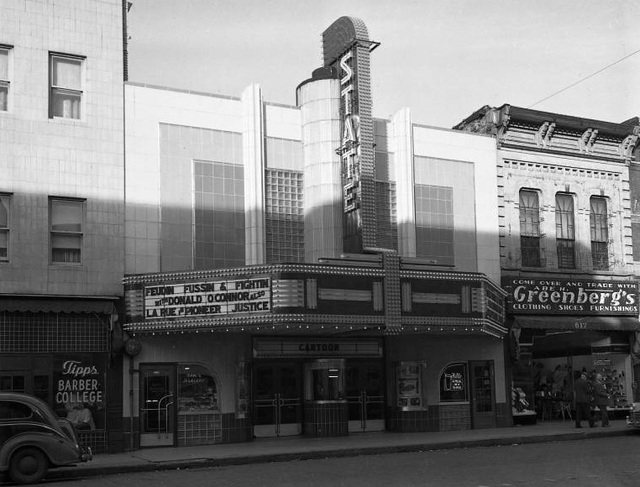 Opened in around 1910 as the Capitol Theatre. On December 2, 1937 it was reopened as the State Theatre remaining as such into the 1950’s when it closed.

The April 5, 1913, issue of The Moving Picture World mentioned a “Capital” Theatre on East Washington Street in Springfield. The owners, I. Burnstine and Joseph Shepard, were planning to open a new theater at 111 N. Sixth Street. Perhaps that was the house that was opened that year as the Amuse U Theatre, which we list at 115 N.Sixth.

Circa 1910 photo as The Capitol Theatre added courtesy Paul Durako‎.

According to news articles, the State Theater was re-modeled 1970-71 by American Amusement Co. of Michigan. It re-opened as “Cinema Art” in May 1971 with the Italian-produced picture, “La cintura di castità” (A.K.A. “On My Way to the Crusades, I Met a Girl Who…”). The theater was supposed to show films with “appeal to college students”, as quoted by an American Amusement executive at the time. This came to fruition owing to the fact that local rock bands used the “600 seat theater” for showcase purposes, per reports of the era.

By June 1971, “Cinema Art” was showing X-rated content and that led to a ruling (in December) that their manager was guilty of obscenity. In 1972, another suit was filed for obscenity and again in 1974, the cinema’s manager was involved in another accusation they “knowingly showed an obscene film”.

Local news also shows the movie theater had a softball league. Sports pages (from May 1975) show a game that pitted Cinema’s team against the First Assembly of God Church. By the spring of 1986, “Cinema Art” closed as video sales of its regularly-screened content put an irreversible dent into their business.

The block was re-developed in 2004-2005 for the Abraham Lincoln Presidential Library and Museum.