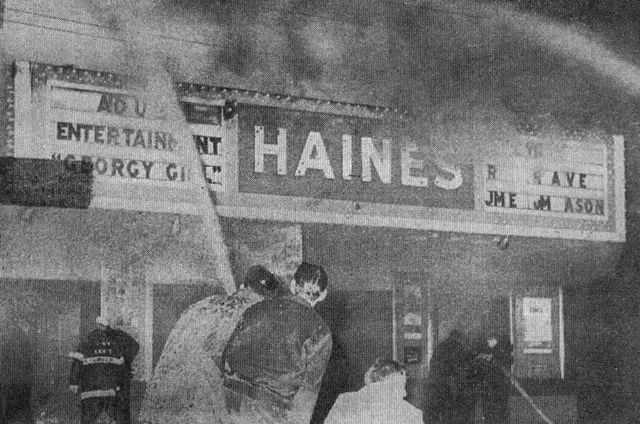 Listed in the Film Daily Yearbook,1943 as being operated by Paramount Pictures Inc, through their subsidiary Mullins & Pinanski. The seating capacity is given as 1,000.

In this old postcard the theatre on the left is the Haines.

Here is another view of the Haines going up in smoke:
http://tinyurl.com/ldp4n8

GenDisasters' Hains Theatre page cites a Nashua Telegraph article of February 11, 1967, which referes to the Haines as a 50-year-old building. If that is correct, then the Haines was probably the theater that was the subject of this item in the June 7, 1917, issue of Engineering News-Record:

The brick and white trim Haines resembles two Maine theaters designed earlier by the firm of Jackson & Salmonson (or Solomonson, as it appears in some other sources), which had offices at 40 Bromfield Street in 1916. Perhaps Salmonson had established his own practice, but the name J. Salmonson also makes me wonder if the magazine mistook Jackson for a first name instead of a partner’s name and abbreviated it to save space.

I have found multiple sources, including a 1916 business directory, which indicate that the correct spelling of the second architect’s surname is Salomonson. One source is the caption of a photo of the Haines Theatre on page 11 of Waterville, by Earle G. Shettleworth Jr. I think we can safely assume that the correct name of the firm that designed the Haines Theatre is Jackson & Salomonson.

My Dad worked at this theater. I believe he managed it when it was destroyed by the fire. After that he managed the Cinema 1 and 2. His name was Bruce Gallagher.

I remember Bruce Gallagher, he was a great guy. His boss was Charles Champine, who as of 2014 was still living in Waterville (and another great guy).