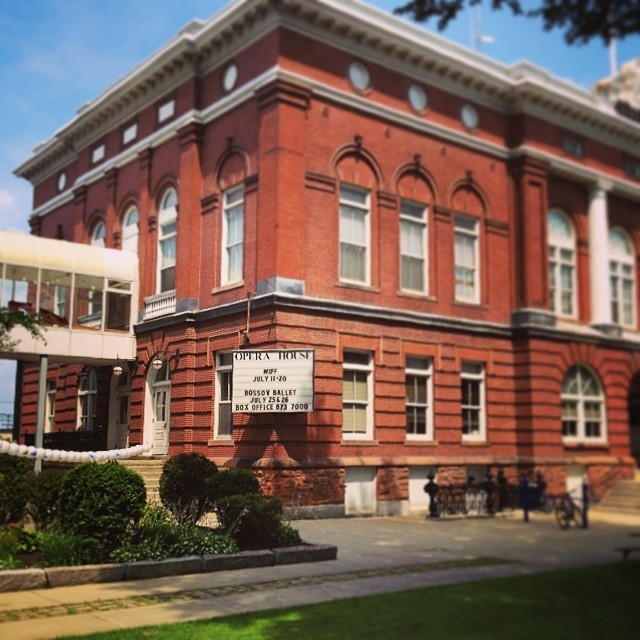 The Waterville Opera House, built in 1902 as the City Opera House, was decorated in the Beaux-Arts style popular around the turn of the 20th century and unusually ornate for a small town opera house.

It later became a vaudeville venue and later, in the 1940’s, a movie house. The Opera House was closed in the 1950’s, when it was acquired by the Jaycees of Waterville who leased the auditorium for local groups. In the 1960’s and 1970’s, the stage was used once again for community theater.

The Waterville Opera House Association was formed to preserve and restore the theater for future generations. Today the Opera House serves as one of the finest performing arts venues in the state of Maine, with sumptuous decor, excellent acoustics, and state of the art technology.

Which Waterville theatre is shown in this old postcard?

That was the Haines Theater that was totally destroyed in a fire in 1966. The movie playing at that time was ‘Georgy Girl’. It was probably the best of the Waterville Theaters. There was also the State, which has been converted to a resturant. After the Haines burned they started showing films at the Opera House again until the new theaters, Cinema 1 & 2 opened on Kennedy Memorial Drive in 1968.
I remember going to the Opera House for some Disney double features during 1966 & 1967.

My sisters, my niece and I have been vacationing here for about 10 years. The Opera House is indeed stunning. We saw a marvelous ballet company there. There is now a new movieplex to replace the old one across the street on Kennedy which had deteriorated, and is now a church. The plex is great, but the Opera House is magic from another era.

Prior to the opening of the Opera House in Waterville, touring shows played at the City Hall auditorium, according to the 1897-98 edition of the Julius Cahn Official Theatrical Guide. It was located on the ground floor, had 700 seats and a stage 26 feet deep.

The Theatre Historical Society archive has the MGM Theatre Report for the Opera House; it’s Card # 458. Address is “City building”. There is an exterior photo taken Feb. 10, 1941. Condition is Fair. The report says that it was remodeled in 1937 and was showing MGM films. The number of seats is hard to read but it looks like “1,131”.