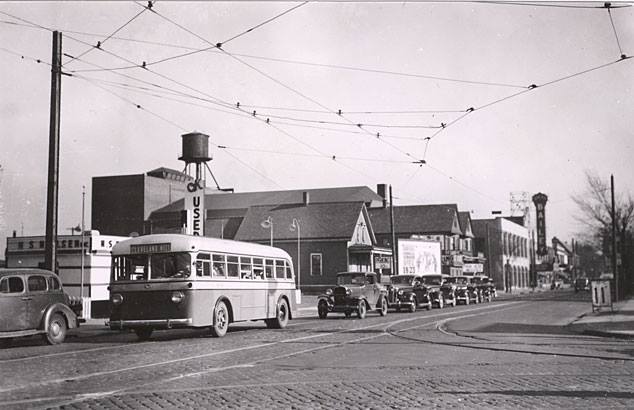 Opened as Shea’s Bailey Theatre in 1928, it has been described as being an ornate Art Deco styled theatre. It had become known as the Bailey Theatre from 1941.

The “Bailey” had a fire on Sept.18,1986 and subsequently razed shortly thereafter. It was designed by Henry & William Spann and opened Sept.29,1928.

I’ve also seen the theater listed as the Bailey AVENUE Theater.
A 3/15 WurliTzer Theatre Pipe Organ Opus 1950 was shipped all the way from North Tonawanda, New York (14 miles) on August 31, 1928, The theater then opened on September 28, 1928, which gave them less than a month to get it installed! Did they get it all running in time? Parts of the organ went to Leon C. Berry a famous roller rink organist in the Chicago Illinois area. Other parts went to the Oaks Park Roller Rink which was supposed to be in Chicago, but I think was really in Portland Oregon. The Console went to the Paramont Theater in Middletown, New York where it is in use today.

“Gee Dad, it was a WurTlizer!”

If my friends and I followed the streets over to the Bailey on a Saturday afternoon, it was a twenty minute walk. If we walked on the railroad tracks it was less than ten minutes.

Needless to say our parents did not approve of this timesaver, and when our dangerous shortcut was discovered, we were all grounded for a month!

i lived across the street from the Bailey showin the early 60’s. saw the first beatle movie there and got my first kiss there. this building was one huge place . there were many bussines’s there . next door was Nickies restaurant. on the 2nd floor to the right was RED CROWN bowling lanes THEY HAD 12 LANES , AND WAS ALWAYS BUSY .. further down toward genesee st was AST cleaners . and on the corner of BAILEY & GENNESEE WAS THE LEADER DRUGSTORE. WE USE TO GO HERE AND BUY 6 CANDY BARS FOR A QUARTER . THEN HIT THE SHOW FOR A QUARTER ALSO .. FIFTY CENTS IN THE 60/S AND WE WE wERE SET FOR THE DAY. I ALSO USE TO CLIMB ON TO THE ROOF AND THROW SNOWBALLS AT UNSUSPECTING PASSERBY’S . (THEY COULD NOT FIGURE OUT WHERE THEY WERE COMING FROM . AS WE GOT A LITTLE MORE OLDER WE WOULD DISTRACT CARL THE MANAGER , BY TOSSING ROCKS AT THE SIDE DOOR CREATING NOISE FOR THE THEATRE PATRONS . WHEN CARL WENT TO CHECK OUT THE SITUATION . WE WOULD SNEAK IN THE FRONT DOORS AND CATCH WHAT WE COULD OF THE MOVIE. I CAN ALSO REMEMBER SEEING A SIGN ON THE DOORS OF THE SHOW TELLING PEOPLE TO RESIST CABLE TV . WE DIDNT EVEN KNOW WHAT IT WAS BACK THEN!! . MAN !! HOW TIMES HAVE CHANGED . . ANY HOW . I HAD A GREAT TIME GROWING UP IN THIS SHOW AND NEIGHBORHOOD . AND WILL ALWAYS CHERISH THESE MEMORIES

I remember going to the Bailey in the 1970’s, they showed two movies for $1.00. The Bailey had a terrible echo and you would miss some of the audio of the movie. In the 1970’s, there was a sign in the phone booth that read, “Only one person in the phone booth at a time”. This sign must of been from the 1950’s when people used to see how many people could fit into a phone booth at one time. The last person to run the Bailey was Joe Vetter and his daughters. He was a real character. I used to talk to him on the CB radio back in those days. He also ran a suicide hotline back then.

saw it on THE MALTESE FALCON ALONG WITH THE CALL LETTERS FOR KLMV RADIO!

In the 1970’s, they would play the Welk closing theme song at the end of the movie. We would stay to watch the usher put the ugly floor lamp on the stage. There was no shade on that lamp. It was big inside that theater. I remember big circular lights in the ceiling.

oh, and red drapes hanging were there used to be organ pipes.