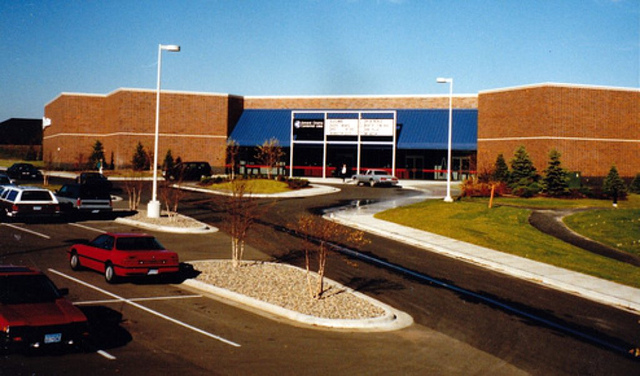 This was a rather generic General Cinema theater opened August 17, 1990, which offered high-priced popcorn and snacks alongside first-run movies in a nothing-special atmosphere. Towards the end, the theater was kept remarkably nice, but when you consider the much, much nicer 16-plex (also AMC) two blocks down the road, it’s pretty much a given.

One cool thing about this theater is that they weren’t afraid to let a movie run a little long – the Centennial Lakes was the only theater to still have “The Passion Recut” after the first week it ran. The Cenennial Lakes 8 was closed March 31, 2005. It’ll have to remain a distant memory now that developers have decided to knock the building down to add to the already-uppity shopping complex that blocks France Avenue of its roots. Remember the France Avenue Drive-In? Yeah, you may be the only one.

In the early 90’s – it was state of the art. Saw many good first runs there. T2 for example looked and sounded great at Centennial Lakes.

I worked for General Cinema Corperation at the old Southdale Cinema prior to moving to Centennial Lakes 8. The 1st showing at the “closed” Grand Opening was Indiana Jones and the Last Crusade in 70mm. Awesome!!
Great times made better with good people!
I left the company in 1992 and had not been back until I saw Pirates of the Caribbean in 2003 after GCC had been bought out by AMC.
Too bad it closed…

Here is a photo of the theater taken at the time it first opened in 1990:

It was demolished several years ago and a new retail development now occupies the site.

Jesse, I think GCC’s popcorn and concessions were in line with other theatres.I was enjoyed running a GCC operation.First Class.

Its still amazing to me that a theatre built new in 1990 is already gone.I can see that the theatre might not make it,but it seems a building that new could have been used for something else.

It might be in a crummy part of town like Regency Exchange 8 a GCC operation that lasted a little over 10 years.

This site is now Pinstripes.

Mike, this theatre wasn’t in a crummy part of town, AMC had a 16 plex just down the road.

This opened on August 17th, 1990. Grand opening ad in the photo section.

Checked some old movie listings from online Star Tribune. Last day of business seems to have been Thursday March 31, 2005. I used to live across France from it and moved that same day. Both me and the theater were gone on April 1. No joke.