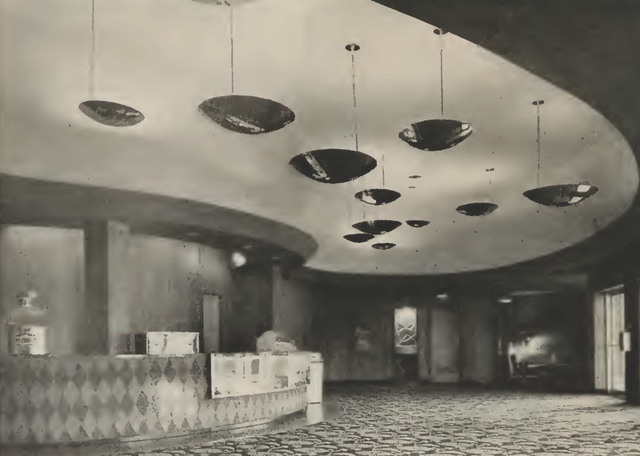 Construction of the La Habra Theatre began in 1949, but for reasons unknown it was left uncompleted for seven years. A Santa Ana Register article on April 1, 1956 announced that Robert L. Lippert Theaters would complete its construction by June 15, 1956 at a cost of $350,000. Gail Santocono was the designer and its amenities included 1,200 seats, parking for 200 cars and two stores. An external feature of the building was a tall round tower centrally placed over the box office, which was sited on the pavement. All seating in the auditorium was on a single floor.

The La Habra Theatre opened on September 6, 1956. Directories and newspaper archives show that there was an earlier theater built as the Garden Theatre in 1919 and later renamed the La Habra Theater, but it was located on Central Avenue (now La Habra Boulevard) and was closed in the mid-1950’s.

For the last part of the 1960’s the La Habra Theatre was a Pacific Theatre and then dropped out of their listing after 1969 and then in the early-1970’s it showed up in the independent theatre listings as a twin. It finally disappeared from the movie listings in 1978 and in the middle 1990’s the building was demolished during downtown urban renewal.

The old La Habra Theatre (formerly The Garden Theatre) at 165 E. Central managed to hang around for about thirty-five years. Esther Cramer’s history of La Habra has one sentence about the theatre: “The opening of the Garden theatre, complete with orchestra, high class vaudeville acts, and films (featuring such stars as Tom Mix and comedian Harold Lloyd), attracted visitors from miles around.” The building had the theatre entrance with box office in the center and space for a small business on either side. When I went there in the early fifties, there was a sandwich shop on one side and a dry cleaners on the other. Inside, there was still a small stage up front. Pictures changed twice a week, and for us kids, on Saturday morning, we got seven cartoons, two serials and a feature (usually a western) for 17 cents! If you had another dime, you could get a bag of popcorn or pull your fillings out with a box of Jujubees. I was about 10 and I made friends with the teenage projectionist who showed me the booth. To enter the projection booth, you had to climb up a wooden ladder that was nailed to the back wall. At the top, you swung your leg out into the booth. The film cans were hauled up into the booth with a pulley. Our theatre closed in 1954 or early 1955 but no one told us why. There was some talk about drugs being delt there. All we knew was that for the next two years we had to get our parents to take us to the Fox Fullerton until the new theatre opened up on Whittier Blvd.

Senior apartments were built on that site. I went there around 1990 looking to see if it might be right for my father.

The lobby of Lippert’s La Habra Theatre was pictured on the cover of the October 6, 1956, issue of Boxoffice Magazine.

The theater came up for discussion yesterday, the 40th anniversary of the moonwalk, as my brother and I saw Clint Eastwood, Richard Burton and the gone way too soon Mary Ure in Where Eagles Dare on that date.

The 40th anniversary of the first moonwalk was July 20th, not July 26th.

There was/is a small school that was just behind this theatre. When I was REALLY young in the mid 80s, I went to that school (it was more of less like a daycare). I remember seeing that theatre and they always had cars parked behind it with white Xs on them. From the playground I could see these cars being towed to the parking lot behind the theatre. I must have been around 4 or 5 years old at the time. I remeber when the old folks home was built too, sometime in the 90s. I went to Walnut Elementry school, which is just about a block away, and sometimes the kids went over there.

When I was a freshman in high school, our history class got out of school one day and walked east for two long blocks until we got to the La Habra Theatre. We were given a free screening of Walt Disney’s “Johnny Tremain.” Most of the kids who left school actually went to the theatre. Getting out of school and a free movie, what could be better? As a result of this mini-field trip, I spent the next several years lusting after Luana Patten.

Thank you, Tinseltoes. I love the article and the pictures. Great memories. I was there opening night along with James Arness and Carol Morris, who was the Miss U.S.A. at the time. She was kind of a knockout. I remember her better than Arness, but I was thirteen and hormones were starting to rage.

The La Habra Theater was just opened when we arrived in town in 1956. Saturday matinee was 25 cents and included newsreels, serials and cartoons. No feature films. Popcorn was another dime. I remember seeing the old theater down on Central Ave. but don’t know if it was used for anything in those days. Now it is the site of the civic center parking lot. During the 60' Pacific built the La Habra Drive-In theater. That one is long gone now.