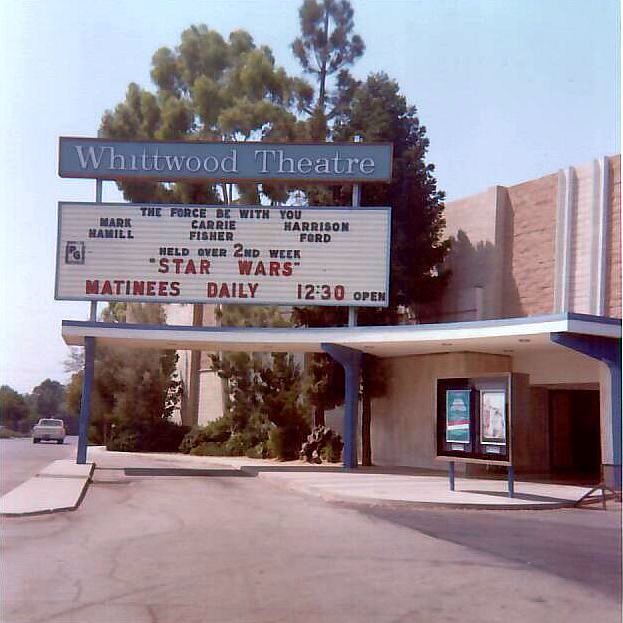 The Whittwood Theatre was located on the Whittwood Mall lot next to Farrell’s Ice Cream Parlor. A charming community theater, it ran first run features from its opening on July 14, 1964, until it closed in the mid-1980’s. The last movie to play the house was “Splash”. Among it’s features were a modest-sized lobby and a raised stadium style seating area at the rear.

It was completely demolished several years later, and a few hundred feet away, also on the Whittwood Mall lot, a Krikorian Theatre was built. It did not last long however, and sits vacant now.

The Whittwood Theatre opened in 1964. It was among the theatres on which construction had begun during 1963, as listed in Boxoffice Magazine’s annual review of new and remodeled theaters. An exterior photo appeared in a Boxoffice feature on October 25, 1964, and a closeup shot of its entrance appeared on the front page of the magazine’s The Modern Theatre section of December 7 that year. It was the subject of an entire article in the Boxoffice issue of March 15, 1965.

The Whittwood was built for Bruen’s Whittier Theatres. It had 960 seats, a fifty-foot curved screen, and the auditorium walls were paneled with a gold damask fabric to match the stage drapes. The building was designed by Whitter architect Ray W. Johnson, and the Los Angeles office of the B.F. Shearer Co. handled the interior layout, design, and equipment.

A photo of the auditorium in the 1965 Boxoffice article showed a feature I had forgotten from my one visit to the Whittwood. Unlike stadium sections in older theaters I had been in, that at the Whittwood was elevated several feet above the main floor, so patrons had to climb a fairly long staircase leading from the cross-aisle to get into it, and would be several rows back by the time they reached the seats. Then they would have to descend stepped side-aisles to reach seats in the first few rows. I suppose this design was adopted to make more room for the lobby and restrooms, which were tucked under the stadium section.

I finally found the exact address for this theater. The Whittwood was listed in a 1968 L.A. Times Independent Theatres guide at 10125 Whittwood Drive. Google Maps places its marker symbol for this address farther from Whittier Boulevard than I remember the theater actually being, but it’s been so long since I was there that I don’t know if it’s Google or my memory that’s off by a few hundred feet.

That’s true. If you were facing the mall area from Whittier blvd the theater was in the back right corner. There was actually quite some distance between it and Farrell’s

Being a fan of old-school marquees,does anyone have any pics from this one. I loved Farrels. There was one near where i used to live in Downey.(i grew up,partially,in Cudahy but went to Downey all the time)

Rich37: The Whittwood didn’t have a traditional marquee. Jutting out at a right angle from the front of the building was a two-sided attraction board of the sort that were used at drive-ins. There’s a photo of it in the March 15, 1965, issue of Boxoffice Magazine.

I worked there till the day that theater closed. I have the no smoking sign from the balcony and a half sheet picture frame that hung in the lobby. I watched the tear everything out of that building. A sad day..

The building occupied by Fitness Active now has the address 10125 Whittwood Drive, so that must be just about where the theater was located. The March 15, 1965, Boxoffice article about the Whittwood Theatre can be seen at this link. An additional photo of the auditorium is on the subsequent page of the magazine.

Hi, my name is Dennis Pierce and I ran films at the Whittwood from May 1976 to March 1983. When I started Gene Keene was the manager. I just want to say hi to all the employees I knew when I was there, Denise Ramirez, Marilyn Westbrook, Jean Harman (whom I later married), Aileen Kennedy, Ladonna, Alfonso, Rose, Sonia, Karen and husband Leroy, Rosemary, Richard Webber and many others I remember their faces but I don’t remember their names, it’s been so long ago.

My name is Leonard and the Whittwood Theatre my first job which started in November 1980 when I was 16 years old! Like a few others here, I was there until the last day that it operated though I continued on with Pacific until early 1991. This theatre was such a fun time for me, I lived on Scott Ave and to get to work all I had to do was hop over the cinder block wall between the apartment building and the back of the theatre. I like to joke that the first black eye I ever had was caused by the capital letter E. A few times I had to change the marque and once while on a ladder I didn’t quite have clips of one of the raised plastic letters hooked onto the marque and it slipped striking me right below my eye. It might not have been an E, but I had to pick a letter to make it easier to tell the story!

This theatre sat where the current 24-hour Fitness gym currently is located behind the apartments on the northeast corner of Scott Avenue and Cullen Street.

When operated by Pacific in the early to mid 70’s it seemed to be focused on the showing Disney films quite a bit of the time. Box office hits usually found themselves at the nearby La Habra Fashion Square 4. (AMC)

I recall being quite frustrated as a kid, that none of the box office hits ever were screened here like Earthquake, or Poseiden Adventure.

Other than the AMC Fashion Square, Pacific was the only game in town (Whittier area)in the 70’s, as they owned all three screens in Whittier, those in La Mirada, Montebello,,and all the area drive-ins.