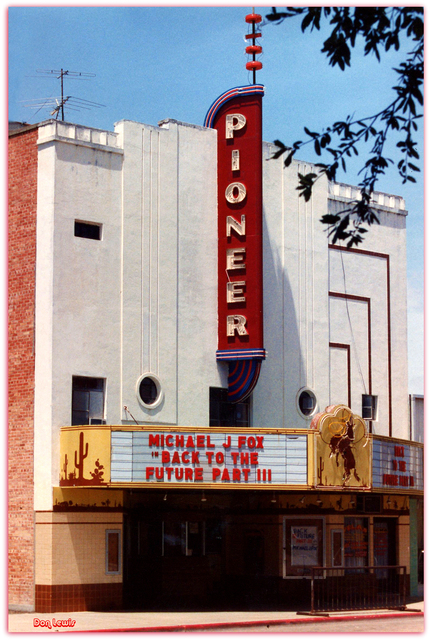 The Pioneer Theatre was opened in 1945. It remained open until around 2004. It now operates as a bar name Saloon.

Ok, I think you made your point, longislandmovies. Let’s move on.

I’ll be passing through Falfurrias in the next week or so, I’ll see if I can find out anything. If nothing else, some pics…

According to the caption of a small photo of its facade published in Boxoffice Magazine, December 8, 1945, the Pioneer Theatre had recently opened at Falfurrias, Texas.

An improved photo of the Pioneer Theatre in Falfurrias.

The theater has been sold(April 3rd 2012). The buyer also owns the Lynn Theater in Gonzales Texas(which had it’s grand opening March 15th 2012) along with the Edna Theater in Edna Texas(re-opens late 2012)The Granada Theater Plainview Texas(mid 2013 opening). The plans are to open this one mid 2013 as live and movies.

I stopped by the Pioneer today as they were gutting the place. I thought about trying to scam some seats but they in pretty bad shape. Talked to the new owner who said that he is redoing the whole thing with digital projection. Said it would take a year for the resto with new neon and the old graphics. He also said he bought the Rig Theater in Premont.

Interesting. I went through Falfurrias about 3 weeks ago and there does seem to be some work in progress on the Pioneer. I’m glad to see it. Could digital projection bring costs down enough that some of these old theaters could become viable businesses again?

Only if the theatre owners have the thousands of dollars to convert. It’s very costly.