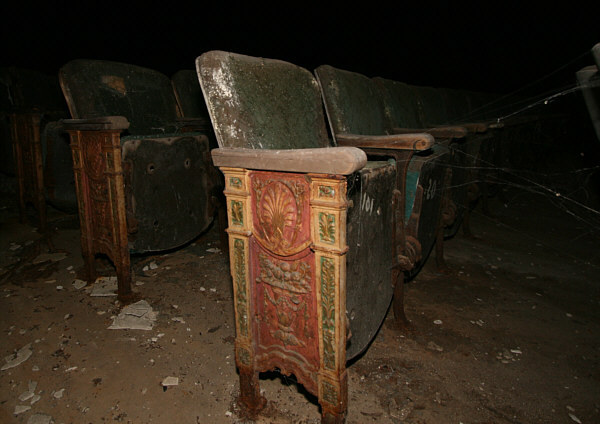 Opened as the Columbia Theatre on 11th October 1892 with “Fadette”. It was soon renamed Stone Opera House. The theatre was designed by architects Sanford O. Lacey and E.H. Bartoo, under the supervision of architect Isaac G. Perry. It was designed in what has been described as a Richardsonian Romanesque style. Seating is located on three levels, orchestra and horseshoe-shaped balconies.

The marquee was removed, but the first-floor store fronts were restored in the mid-1980’s. In 1987 there were plans put forward to convert the theatre into two 300 seat theatres within the building.

I have found the photos and find them to be very upsetting. The roof should never have been allowed to deteriorate to its present condition! You can see that the former opera house was a “treasure” at one time. My thoughts will be on that auction come Thursday. Wish I were closer to Binghamton than 200 miles!

Today is May 24th, auction day! Hope to read a post about it soon! Thanks to any CT member who was there!

Patsy .. Being retired now I had the opportunity to go to a public opening to see the interior of the Riviera Theatre (Stone Opera House) at 8:00 yesterday morning and attend the auction 3 hours later at 11:00. However, as this was the first time I had ever in my life attended either of these type events, I was unprepared for the harsh realities entailed. The interior of the theatre requires very careful walking about with dirt, garbage, chunks of wood and various other “crap” make walking difficult & dangerous, to say anything of the obvious structural problems you could encounter. AND a lot of it is DARK !!! You REALLY NEEDED a GOOD FLASHLIGHT to navigate around which I had not come prepared with. I was EXTREMELY FORTUNATE to meet John Darrow, a board member of PAST (The Preservation Society of the Souther Tier) who is also a architectural restoration expert. He was extremely friendly & well-prepared & I was able to accompany him & his flashlight on my time inside the building. I really cannot thank him enough. I followed him up to the second floor & got up onto the balcony with him in confidence knowing he knew what he was doing & feeling pretty safe … I would never have gone up there alone without a flashlight. He did travel up the long stairs from the balcony to go behind it & got into the projection booth. I did not follow in that trip since the stairs did not seem to have any kind of railing & were quite debris covered & I was afraid of falling … though I really would have loved to see the projection booth. The 15 minutes I spent at the open house were extremely eye-openingly painful. I found out the roof which I had THOUGHT was repaired in September was NOT completed & much of the north west corner of the theatre is still open to the elements. (John told me the “owner” who contracted the job DID NOT PAY AFTER THE FIRST HALF OF THE JOB WAS DONE … so the cntractor simply abandoned the job.) The north wall which showed some paint left & ornamentation when those pictures were taken & posted on “Treasures of the Tier” website, is now virtually completely bare & shows virtually no idea of what it looked like in the days the theatre was running. The railing & part of the structural front kneewall of the overhead balcony has broken off & is lying across the orchestra seats below. Like I said … very depressing. John said to restore the building to ant real functionality would probably take about 4 MILLION Dollars. I’m guessing that to restore it to it’s original glory as a theatre would probably be 10 MILLION assuming it to even be possible. At the auction itself, there were probably about 300 people in a room that holds 150!!! IT WAS STANDING ROOM ONLY !!! There were 32 properties on the docket for this auction & The Stone Opera House was to be the 24th offering. It took half an hour or more for the auctioneer to just explain all the rules & status of the properties & once he finally got started auctioning the first 3 properties (in what they call a “Buyer’s Choice”) his banter was so difficult to follow & the room was so noisy that I really wasn’t getting much out of the proceedings … plus I was standing & getting tired. When The Stone Opera House was offered assumably a couple of hours later, I was pretty sure I would not be able to tell who bought it & for what so I left about 11:45 & decided I’d wait until today’s news to see what happened. This morning’s paper listed how all the properties sold … amounts vs. assessed values but no mention of high bidders. The Stone Opera House sold for $68,000 (I am not sure if that includes the 5% buyers premium or not) against an assessed valuation of $60,000. The paper DID say that the new owner has revealed no plans for the building. I am hoping that with that kind of investment that their intentions are to restore the building. But I am sure it will never be the glorious theatre it once was. That’s my full report !!! Jim Macumber

Jim: Thanks so very much for your detailed report. I only hope that the new owner restores the building! I have walked through many theatres and a good companion is a good working flashlight and a good tour guide. Thanks again!

How sad to read about the total decay of a once magnificent theater. I saw many movies there as a kid growing up in the 50’s and 60’s. I’ll always remember that amazing marquee that Comerford Theaters built to connect the Riviera and Strand.

This brief biography of Elfred Bartoo says that he worked as a draftsman on the State Capitol project with Perry in 1891, which is also the year Charles Stone announced his intention of building this theater. The biography also notes that, prior to forming his partnership with Bartoo, Sanford Lacey had been Isaac Perry’s senior draftsman.

Ranjit Sandhu, who compiled a partial list of the works of Leon H. Lempert & Son, says that Lempert acted as consulting architect on the Stone Opera House. He also credits I. G. Perry as the architect of the project, though he doesn’t cite a source for the claim. Still, it seems likely that Stone would have chosen Binghamton’s leading architect to design his theater, and also likely that Perry, as busy as he was with the State Capitol and other projects at the time, would turn the project over to his trusted draftsmen.

What is the current restoration status with this historical theatre??

Patsy — I am afraid that absolutely nothing has happened since last May 24th. I have seen nothing further at all & still have no idea who the buyer was nor anything about their intentions. Wish I had better news. Jim Macumber

I worked in a building adjacent to this theater in the early 1990s. It was in a bad state of decay back then and mystified us. Today, after browsing Google Earth it appears that in recent years someone appears to have stabilized the root with some sort of tarp.

Back in the 1990s we wondered about this vast, open room, but wondered not why it had survived so far, but wondered why it was not being used anymore.

Thanks to this site this forgotten theater now has a name.

Reopened as Riviera on September 1st, 1930. Grand opening ad in the photo section.