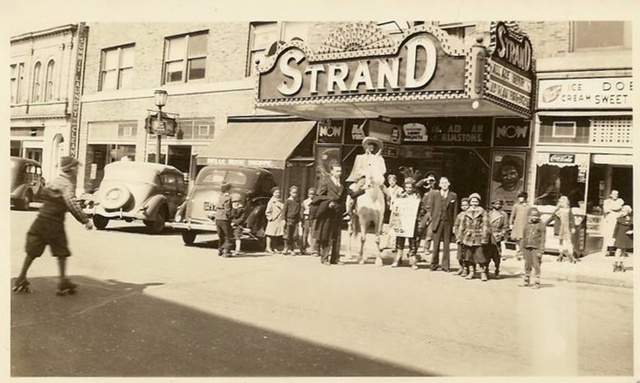 Listed in the 1951 Film Daily Yearbook, the Strand closed in the late 1980s, leaving Summit without a cinema until 1997. The building has been converted to a mini mall.

The Strand in Summit has been completely gutted—the roof was removed, and the facade demolished. The two side walls and stage remain with some metal roof trusses over them. The space was filled in open air mall style. The stage house is a small cafe with access on the side.

Listed as an Art Theater in teh 1961 Film Daily Yearbook.

Joe’s comment may sound bad, but I must say, I just saw it yesterday for the first time by accident and geez, it was beautiful. Sure they really transformed it, it looks like some high-end European modern architect had a field day, but at least they didn’t tear it down. It is quite unique!

I was cycling yesterday from the west and came up a long hill to Summit center and saw the Strand. The stagehouse is a Japanese restaurant with yes, a side entrance. The lobby and auditorium looks like a glass/steel shell that’s modern and I believe it was retail and a gallery? I only had a few minutes to look before I caught the train. But there’s a gap between the glass/steel and brick stagehouse of about maybe 12-15 feet and it’s a pedestrian promenade more than it is a mall.

The only other reuse I liked about this was the Darien, CT Playhouse in that stores were on the lower level and the theatre was still there, but with another entrance since the front lobby was a clothing store.

1986 picture here. The marquee looks a little battered, perhaps hinting that the end is near.

I remember this theater well. My friends and I took the old rickety Erie Lakawana train from Berkeley Heights to Summit to see THE HOT ROCK (1972). Years later my high school German class took a field trip to the Strand for a special showing of a German-language film. The movie was boring and I spent most of my time trying to read the rapidly changing English subtitles instead of soaking up the linguistic experience. Still it was good to be back in that theater after several years.

Unfortunately the Strand met a fate similar to other theaters: They either closed or were rebuilt into cramped shoe-box multiplexes (ala the cinema in Bernardsville, NJ).

The big screen mega auditorium theaters are few and far between. Going to a movie was certainly a better experience when the screen was tall and wide and the projected image was gigantic no matter where you sat in the theater.

A drawing of the Strand based on old photographs can be seen here.