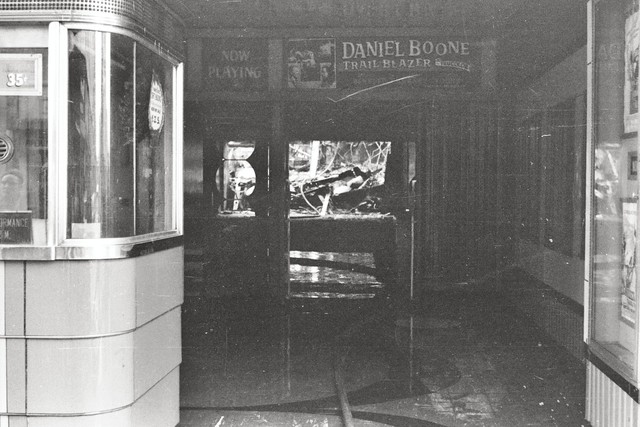 Built on the site of the Grand Opera House/Grand Theatre which was destroyed a tornado on Palm Sunday in 1920 (it has its own page on Cinema Treasures). The Rialto Theatre was opened in April 1921 with Norm Talmadge in “The Passion Flower” & Orpheum vaudeville on the stage. It was equipped with a Smith organ which had 3 manuals and 12 ranks. It was destroyed by fire in 1956.

Every auditorium built on this site met a tragic end. The DuBois Opera House, opened in 1870, was destroyed by fire in the mid 1880’s. The Opera House was rebuilt and later destroyed again by a tornado on Palm Sunday 1920. It was again rebuilt and later named the Rialto. When the Rialto burned down in 1956, there were plans to rebuild but nothing ever became of it.
As the Rialto was burning, two firemen were injured when they were figthing the fire through holes in the roof. As they were fighting the fire the roof started to cave in and they jumped off and fell over 10 feet onto the building next door.
The site is now occupied by the Fountain Square Condominiums.

Here is an anti-trust lawsuit involving the Rialto, Grove and some other theaters in Elgin:
http://tinyurl.com/3arm8a

There is one theatre listed under Elgin IL in the 1897-98 edition of the Julius Cahn Official Theatrical Guide: the Elgin Opera House. There are no street addresses in the Cahn Guide. I assume that the Elgin O.H. sat on the site of the Rialto, and is not the same as the DuBois Opera House in Elgin. The Elgin O.H. was on the ground floor, had 1,110 seats and a stage which was 40 feet deep.

Proof can be found at under “.4 Silver Screens and Crystal Sets” under Chaper VII at this website:

Thanks for clarifying that up for me.

“The only photo I have is of the rear of the theatre by the Fox River and shows a Chicago Aurora & Elgin train and a neat Meister Brau beer ad on the back of the building.”

Riis Park—I’ve seen photos of that Meister Brau ad too, even though the CA&E expired years before I was born. I have a video on the CA&E which has some views of downtown Elgin, including the Rialto. The video was shot during the CA&E’s last days in 1957, so I’m wondering if the Rialto lasted that long.

Hey Paul , I like to see your Photo, I have a few more photos

I don’t have any. The photos I’ve seen are from books & magazines.

It is too bad that this theatre burned down. However at least there’s the one photo of it (and, I hope, more).

According to “the Encyclopedia of the American Theatre Organ” by Mr David Junchen, pg. 629, the “Rialto Th.” in Elgin, Illinois, originally had a three-manual Smith theatre pipe organ, installed in 1923. The organ had Spencer blower number 14426. Unfortunately, Mr Junchen did not have any additional information on the organ at the time of publication of the book, such as number of pipe ranks, or additional blower info horsepower, static pressure).

Does anyone know what happened to this organ, and where it, or its parts, are today?

However, in my research I have identified at least a dozen Smith organs that were sold from theatres to churches in the 1930s-1940s, when many churches were too poor to afford a new organ and the theatres considered them surplus equipment after sound movies came in. These resales ensured the organs' survival for at least a few more decades.

At three manuals and (probably) from 10 to 12 ranks of pipes, this organ would have been amongst the very few larger theatre organs built by Mr. Smith’s short-lived own Chicago firm, the Smith Unit Organ Company, after the successful Seeburg – Smith partnership ended in 1921, and before he moved to Geneva, Illinois in 1924 to found what would later become the Geneva Organ Company.

As the builder of my beautiful two-manual console, I have an especial interest in all of the organs built by this small company and would love to know more about this one. Thanks!

The predecessor of the Rialto that was on the same site, the Grand Theatre, was listed in the 1914-1915 American Motion Picture Directory as the Grand Opera House, but with the address 40 Grove Ave. While it may be that the lot numbers were shifted sometime after the Rialto was built, neither address is in use today, the greater part of that block now being under the footprint of the Fountain Square Condominium project, which uses the address 50 S. Grove.

A history of Elgin has this to say about the Rialto:

“The Grand was rebuilt and opened as the Rialto in April 1921, with Orpheum Circuit vaudeville acts and Norma Talmadge in ‘The Passion Flower.’ It had a seating capacity of about 1,350 and cost upwards of $130,000. Patrons had a complete view of the stage from every section, even though the last row of seats was more than one hundred feet away. The stage had a frontage of seventy-two feet and was thirty feet deep.”