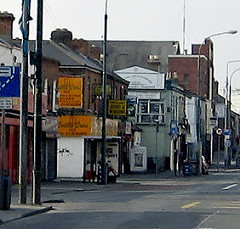 The former Strand Cinema was situated just outside the city centre in the Fairview district.

It opened as the Stand Cinema on 16th April 1938 and was equipped with a full stage, flytower and dressing rooms. The proscenium arch was 35 feet wide. In 1948 it was linked with the Drumcondra Grand and the Fairview Grand cinemas, although each appeared to be a separate limited company.

After suffering some damage by a German bombing in May 1941 the Strand was closed. The cinema was enlarged from its original 500 seats to 1,100 when it re-opened on 16th March 1945 as the New Strand Cinema.

Closed on 31st January 1970 it became a bingo hall it was last used as a bowling alley and fitness studio, but has now been demolished, apart from the facade which serves as the entrance to apartments and a medical centre which were built on the auditorium site.

A 2005 view of the exterior of the Strand Cinema here:
View link

The Strand Cinema, with the exception of the street facade and entrance area which is being retained seemingly, has now been demolished.

After a long period when it became more and more decayed, I spotted demolition crews working on it earlier this year, with all of the auditorium area already demolished.

Got a better look at the developments here yesterday.

All, but the first three feet in depth, or so, of the red brick street side facade is completely gone. The facade is now propped up for retention.

All of the auditorium area is demolished down to ground level.

The apartments built here are now for sale. The retained part of the facade and the cinema name leave some memory of the Strand Cinema.