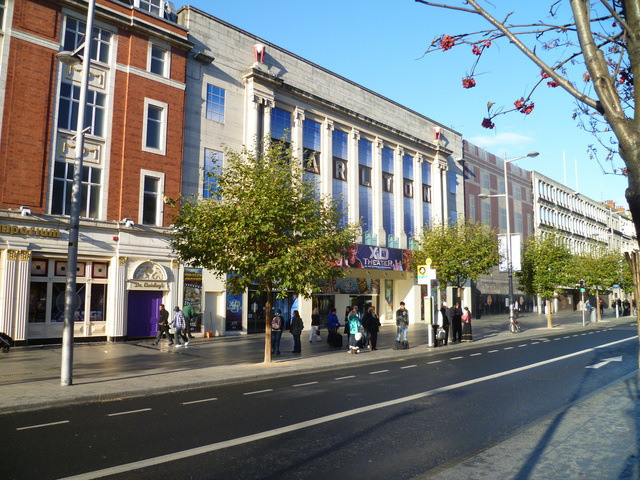 Built on the site of the first Carlton Cinema (1915-1936, architect T.F. McNamara) which had 600 seats. The Carlton Theatre was designed by architects Robinson & Keefe and opened on 16th April 1938 with “The Awful Truth” starring Cary Grant. It stands opposite the Savoy Cinema in Dublins' principal thoroughfare Upper O'Connell Street.

An exercise in restrained Art Deco style, the simple lines of the facade have stood the test of time well, Inside, the decoration relied principally on the use of paint and lighting but two large displays with a musical instrument motif were formed by twenty panels on either side of the screen. There was seating for 1,500 in the stalls and 500 in the circle. A stage and dressing rooms were included in the design.

In 1956, the Carlton Theatre held the European Premiere of Bill Haley in “Rock Around the Clock” and it played to packed houses for three weeks. Many horror films were played at the Carlton Theatre. In 1959 it was taken over by Associated British Cinemas(ABC) and in the late-1960’s it passed to EMI. Many concerts were held on the stage in the 1970’s including performances by Duke Ellington, Cleo Lane, Johnny Cash, James Last, Fats Domino, Nana Mouskouri, Marlene Deitrich and Don McLean.

Last operated by MGM, the cinema was sub-divided into 3-screens and then a fourth screen was added in space that had been the cinema restaurant. The Carlton Cinema was closed on 20th October 1994, two of the final films screened were “Singing in the Rain” and “Rock Around the Clock”.

Since then it has been the subject of court battles to redevelop the site and in 2003 was Compulsary Purchased by the city council to facilitate a new project on the site of the cinema and an adjoining area which has been vacant since 1976. It is not known how much, if any, of the Carlton Cinema will remain.

In 2011, part of the building was being used by an amusement attraction known as the XD Theater.

The seemingly eternal saga of the poor Carlton, fixed and frozen in time continues.

It seems that the Irish Planning Appeal Board is to consider objections to the very large scale O'Connell St redevelopment plan, which would have seen the Carlton facade (only, rest of facility demolished) reconstructed further up the street, as part of a major shopping / apartment development. A considerable number of objections, some general, but many relating to redevelopment of the premises roughly behind the Carlton in Moore Street,will be considered.

New temporary decorative panels have been added to the lower floors of the Carlton, promoting some sort of video arcade style game parlour. A photo is here

The planning appeal board has made findings critical of the proposed redevelopment of this major site, including rejecting the 13 story block that was one element. They also criticised the local authority, for non respect of their own area development plans.

So more delay, uncertainty and the future of the Carlton, now closed for almost fifteen years, remains unclear. Will a revised development still go ahead, will the Carlton facade move up the street?

A vintage October 1959 photograph of the Carlton Theatre:
View link

Update from November 2011. Closed since 1994, the ambitious redevelopment plans have come to nothing and in the present climate see unlikely to do so in present economic circumstances. Some of the cinema is used for for a “cinema seat” based theme park style ride experience.

This page has a photo of the XD Theatre, the current occupant of the Carlton. It might not be showing real movies, but the attraction is probably taking in enough revenue to keep the roof repaired.

The October 13, 1915, issue of Building News and Engineering Journal had an item which might have been about the original Carlton Theatre, which this house replaced in 1937:

“Another new picture theatre has been commenced in Upper Sackville Street. Dublin. The hall will be 100 ft. by 28 ft., and 26 ft. in height. There will be a tea lounge and offices in the front having a depth of 50 ft. The interior of the building will be finished in polished mahogany. Mr. T. F. Macnaniara. Great Brunswick Street, Dublin, is the architect, and Messrs. H. and J. Martin, Grand Canal Street, are the contractors.”

“XD Theatre, the current occupant of the Carlton”

The XD Theatre, which provides a theme park style ride experience, only uses a tiny part of the former Carlton premises, not clear what the rest of the space is used for – probably nothing.

“The October 13, 1915, issue of Building News and Engineering Journal had an item which might have been about the original Carlton Theatre”

Yes, this is indeed the original Carlton which closed in 1936. The architect was T F Mc Namara.

No change in status nor any progress with the grand “redevelopment” scheme for O'Connell St, – the ride experience in a part of the Carlton complex continues to operate.

If you walk into Dr Quirkes next door down to the back on the right hand side- you can see that it is linked to the back of the Carlton. The area is currently used for slot machines and the likes.