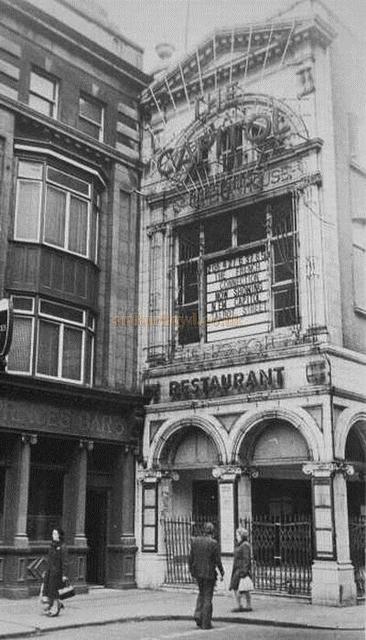 Located at 4-8 North Prince’s Street, a short narrow side street just around the corner from O'Connell Street Lower in the north of the city centre. The La Scala Theatre & Opera was opened on 10th August 1920. It was designed by architect Thomas F. McNamara in an Edwardian style, and took its name from the famous La Scala in Milan, Italy.

The foyer had a marble floor and panelled wood on the walls which had previously been installed in the luxury liner ‘Mauretania’. Seating was provided in orchestra, dress circle upper circle levels and there were nine boxes on each side of the proscenium. As the project was being completed, it was decided to equip the theatre to screen films, and a projection box was built at the top of the theatre, above the upper circle. The proscenium was 37ft wide and the stage 50ft deep. The theatre also contained a Rococo styled ballroom with a resident 18-piece orchestra and cafes, lounges and meeting rooms.

The La Scala Theatre & Opera only hosted two seasons of opera before it turned into a cine-variety theatre and was re-named La Scala Picture House. It was taken over by Paramount Pictures Inc. in 1927 and was renamed Capitol Theatre (as a tribute to the famous Capitol Theatre in New York) on 1st August 1927. The Capitol Theatre was equipped with Western Electric(WE) sound equipment and was the first cinema in Ireland to show ‘talkies’ when Al Jolson in “The Singing Fool” played to packed houses from 22nd April 1929 (50,000 tickets were sold in its first week).

The Capitol Theatre operated as a full time cinema from 1934 until 1943, after which cine-variety was presented again. It was a full time cinema in its later years and the Capitol Cinema was closed on 8th March 1972. It had been purchased, together with its neighbour the Metropole Cinema on O.Connell Street Lower, and both cinemas were demolished and replaced by a warehouse for British Home Stores, which today is a Penney’s department store.

This was one of Dublin’s greatest lost treasures, it makes me sad every time I pass the site. My father took me there to see Mary Poppins in the 1960’s, I still remember being in awe of the stunning interior, it was magnificent.