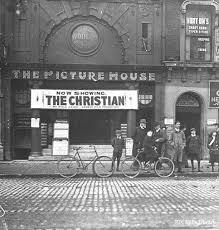 The Picture House was opened on 8th April 1910 by the British based Provincial Cinematograph Cinemas Ltd.(PCT) chain. It had 233 seats and was the second cinema to open in Dublin. It was a conversion of the ground floor level of an existing building by architectural firm Naylor & Sale of Derby, England. In 1917 it was taken over by Robert Morrison and was re-named Sackvile Cinema.

Taken over by the Capitol Theatre Company it was slightly enlarged to seat 270 and re-opened as the Astor Cinema on 27th March 1937 with William Powell in “The Great Zeigfeld”. The Astor Cinema was closed on 23rd December 1946.

It was converted into retail use and now operates as a McDonald’s Restaurant.