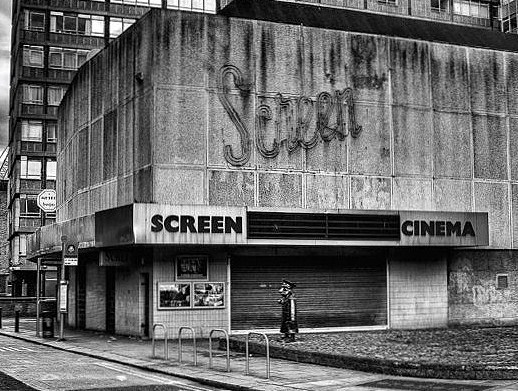 Built on the site of the massive Theatre Royal and the smaller Regal Cinema, the Screen opened in 1964, originally with just the one screen. It was designed by Sir Thomas Bennett & Henry J. Lyons and Partners.

It has since been tripled and continued to screen films until its closure on 28th February 2016.

There was a quirky little bronze statue of a commissionaire just outside the entrance doors to welcome patrons to the cinema, but this was removed a week prior to closing.

A recent photograph of the entrance to the Screen Cinema:
View link

Closed permanantly yesterday 28/2/16 -Normal showing on its final day but very few people showed up unfortunately. All furniture and fittings were being removed today 29/2/16 and the signs on the front were taken down. The bronze usher statue was removed last week.

Had the “honour” of being at this cinema when it opened as a three screen in 1980. Movie was RAISE THE TITANIC. Scores of visits there when I used to attend the DFF in the 80’s and 90’s – but have not been there for over a decade.