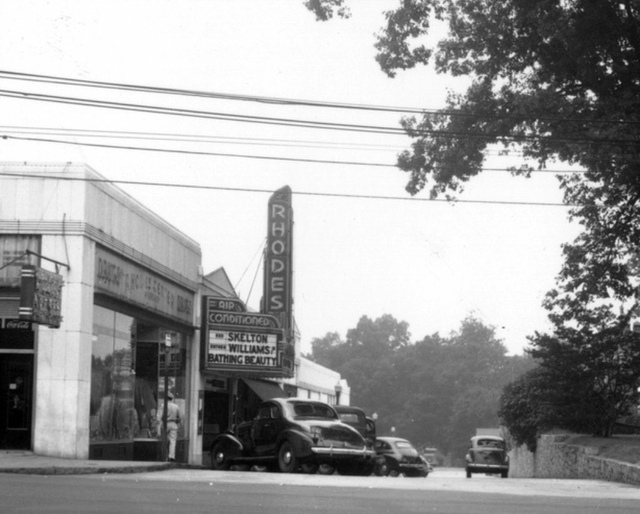 Opened June 10, 1938 with Clark Gable in “Test Pilot”, the Rhodes Theatre was the Atlanta flagship of the Storey Theatres Inc. chain. A beautiful and luxurious showplace, the Rhodes Theatre became the only place in town to see the latest release from either Bergman or Fellini. It also seasoned its fare with an occasional classic like “Coconuts” or “Citizen Kane”.

When Storey Theatres Inc. didn’t renew its lease, attempts were made to preserve the theatre, but all to no avail. The theatre was gutted and it’s exterior was mangled beyond repair by a developer who fell short on cash and left the property in ruins.

This was one of the more exciting and exclusive theaters in Atlanta. Big films would play here and often be held over for months and months. It was an “event” theater and the marquee was always lit up and exciting to drive by. Whatever film was booked you know it was important. The musical HALF A SIXPENCE played there for quite a while.

Great stuff, and thanks for the great memories, Daryl and others…I have terrific memories of this place in its waning days in the eighties. Really fun reading all the comments.

Yes, Cliff Carson is correct. There were many first run premiers; I particularly remember both The Lion in Winter (1968) and Cactus Flower (1969) each having their “Reserve Seat-Exclusive Roadshow Engagement” Atlanta premiers at the Rhodes Theater.

Does anyone know what happened to the Rhodes Theater signs that use to hang on the building? Also does anyone have a head-on photo of the outside of the theater?

The Rhodes was not as elaborate as the Fox, Roxy, Grand, or Rialto, but there was something about this theatre that made it special. “Zorba the Greek” had a long run there, and I saw it three times. Also saw “Joy in the Morning” and “Those Calloways” there; both average films but the Rhodes made them special. The auditorium was at 90 degrees right to the entryway and rather small lobby and concession area. An unusual feature was what appeared to be windows down both sides of the auditorium. I do not remember a single projection error or other glitch in ten or so visits. The theatre has been stripped to the bare walls, but it still stands, at least in the latest Google views.

The only film I remember seeing there was “Brazil”, not long before it closed. We used to drive past it all the time on our way downtown via Peachtree. I hate that Atlanta has no respect for its history.

In March, 1940, the Rhodes was the first theatre in Atlanta to present “Gone With the Wind” following the completion of the epic’s world premiere engagement at Loew’s Grand. An ad with more details has been posted in the Photos Section.

The Rhodes first opened on June 10th, 1938, as part of the new Rhodes Center. The inaugural film was MGM’s “Test Pilot,” which had already played at Loew’s Grand in downtown Atlanta.

I saw Bonnie and Clyde there when it premiered in Atlanta. Although I grew up in Sandy Springs, that was the only time I ever went to that theater.