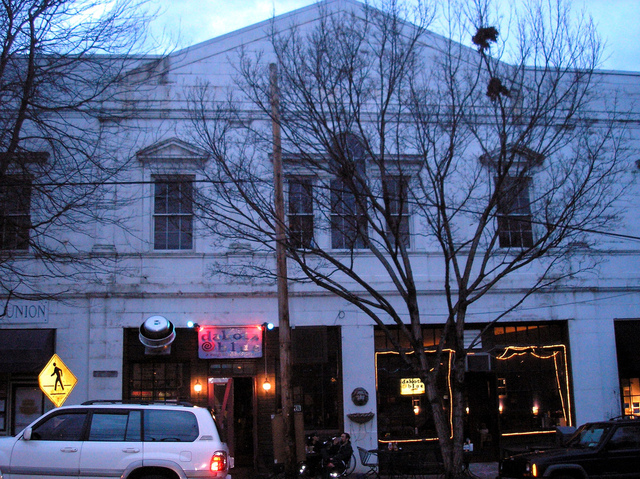 The Temple Theatre opened in the Grant Park Masonic Temple Building on November 29, 1934 with Fred Astaire & Ginger Rogers in “Flying Down to Rio”. It was closed in 1967 and had been closed quite a few decades when I happened on it in the 1990’s. The exterior was a bit non-descript with no marking indicating it ever was a theatre. A merchant in the area recalled the site being used at one point as a laundry, but could not recall much more.

The Masonic symbol on the facade was still clearly visible when I saw the theater again in 2003. Apparently the upper floor was used as a Freemasons' Temple, thus explaining the name of the theater. The marquee had been removed and it was difficult to tell if the original auditorium still stood behind the facade. If what I could make out of the back of the building was the original structure, than a seating capacity of 390 could have been about right.

Located at 456 Cherokee Avenue (on the east side of the street), between Memorial Drive and Grant Park, it would have been in a pretty rough part of town when it operated as a movie house. The audience would have been drawn from the neighborhood around Grant Park; the Capitol Homes Federal Housing Project (that was being torn down in 2003); and the area known as Cabbage Town (the frame houses that were originally rented out to the workers at the old cotton mill opposite Oakland Cemetary). As nearly as I can recall, the Temple ceased to operate as a movie house sometime in the late 1950’s. By that time, at least a dozen neighborhood theaters catering to white audiences closed down. Remember, these theaters operated in an era of racial segregation.

Here is a photo from January 2007 of the former Temple Theatre. I discovered that the building once housed a chapter of Freemasons, hence the name â€œTempleâ€.

The Temple opened the first of December 1934.

In the late fifties I lived off of Cherokee avenue on Oakland ave. I loved growing up there and going to the temple every weekend. I got in with a capitola token because I did not have the .25 cents it cost to get in. It wasn’t a rough area when I was growing up there. Although; anyone coming to theater from cabbage town were rough at that time. You didn’t mess with anyone from there. Loved going to the park and skating and swimming at the big pool at grant park.

Described as a modern theatre in the Grant Park Masonic Temple Building, the Temple first opened on Thanksgiving Day, November 29th, 1934, with the sub-run “Flying Down to Rio.” Tickets at all times were 15 cents for adults and 10 cents for children.