Closed in 1980 after a crackdown on adult cinemas.

and reopened as an adult cinema called the Cine Showcase Cinema on November 12th, 1976. Ad in photo section. 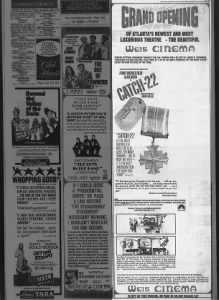 Margaret Mitchell’s accident in front of the theatre. 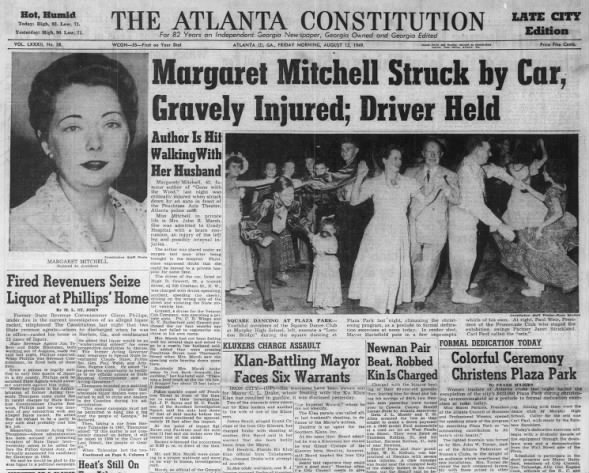 This opened as Peachtree on October 17th, 1940. Grand opening ad in the photo section.

Here is picture from Atlanta Time Machine of the Peachtree Art after it was the Weis Cinema.

I would like to take this opportunity to clear up a few points regarding the Peachtree Art Theatre which was operated by my father from 1946 until 1971. The theatre was located at 1137 Peachtree Street in Atlanta. It had a full concession area which featured imported candies and popcorn that was specially grown by the Word Popcorn Company in Scottsboro, Alabama.

The theatre was highly successful and overflow crowds were commonplace throughout it’s existence. Many notable Atlantans were regular patrons including Bobby Jones, the famed golfer, and Margaret Mitchell the author of Gone With The Wind. The theatre closed in 1971 due to the redevelopment of the property.

I hope that this clears up some misconceptions that seem to exist.

I worked at the Peachtree Art when I was 15, back in 1959. It did not have a concession stand. No popcorn or drinks. They showed mostly foreign films at that time. Never had much of a crowd.

The Peachtree Art was a very nice theatre in the 1964 – ‘65 time frame. Its atmosphere enhanced the films it presented. I saw “Woman in the Dunes”, “He Who Must Die”,“Seance on a Wet Afternoon” and several others. Most, except for “Seance” had subtitles. It had a good sized screen (my guess 40 feet) and always flawless projection. Admission was $1.50, same as Fox, Roxy, etc. Around 1970 or '71, the Weiss chain tried to turn it into a first run theatre, but it soon succumbed to the hotel and office building boom.

Thanks Daryl but that place was just a part of my past and the picture AND the information meant a lot. Thanks again.

A_Mclean: Your new photo link is as good as it gets. If you want to know more about the area around the Buckhead Art Theatre, I’ll be happy to provide.

SOMEONE SENT ME A PICTURE! I don’t know how to post on its on page but here is an actual picture for those interested. Thanks to everybody for their help.

On the above link, image #6 shows the location the best. Note the boarded up area on the camera side of the awning on the right side of the picture…that’s pretty much the location of the alcove entry to the old Buckhead Art Theatre or within just a few feet.

Thanks to StanMalone, Marcel & Daryl for the help. I searched far and wide and couldn’t find a picture of the actual theater but I’m wondering if this side view of a store with the awning is in fact the place? I’m hoping one of you gentleman recognize the street and surrounding.

Marcel, can you post one or two of the ads you have? It would definitely be appreciated.

The Buckhead Art Cinema at 3073 Peachtree Road was an all-adult house located across the street from Sears Roebuck, diagonal from the Capri Theatre. It was open in the early 70s (at least) thru the late 90s to early 00s as I remember. If it was still there today, it would be adjacent to the now closed “Geek Squad” store. Hope this helps.

A_Mclean/Stan Malone, according to my film ad archives, the Buckhead Art Cinema was located at 3073 Peachtree Road at Corner of E. Paces Ferry. I have ads from 1990.

Is this the theatre your speaking of StanMalone?

The address; “3340 Peachtree Road” sticks out in my brain but they must have knocked a lot down for it too look like this now.

Mclean: I think that the theatre you are talking about was the Buckhead Art. It was located at the five points intersection of Buckhead.

I have lived in Atlanta since 1939, and I really think some of the historical comments about this theater and others in the area are wrong. Whatever!! I do remember seeing the original French subtitled version of Diabolique at the Peachtree Art, which is pictured and was at the corner of Peachtree and 13th Street. As a real trivia note (but not to Atlantans), the author of Gone with the Wind, Margaret Mitchell, was killed at this site in the early fifties. She was crossing Peachtree to get to the theater with her husband and hesitated in the middle of Peachtree because of oncoming traffic. She was hit by a taxi driven by a drunken driver, and died about five days later, never regaining consciousness.

Where was the Peachtree West Mentioned in Boxoffice Sept 22,1974 ?

In late 1965 to early 1966 there was a re-release of the Batman/Robin shorts from the 1940’s. All the shorts were spliced together that produced a 4+ hour, multi-episode, full length feature retitled as “An Evening with Batman and Robin”. This was at a time when the campy, Adam West version was doing gangbusters on TV. I saw the movie there and was in my early teens. Later on, I believe I saw The Green Hornet (movie) at the same theater. Also, F.Y.I. , after the theater and the surrounding buildings were raised and after other failed developments The Campanile office tower was built where the theater, et al once stood.

I remember the Peachtree Art Theater in the late 1950s through 1962. The Red Shoes ran (again) in this period. Also The Horse’s Mouth 1958 with Alec Guinness. The theater was across the street from Baker Audio (Hi Fi) and classical radio station WGKA which were in an old house at 1140 Peachtree. The WGKA antenna tower was west of the Baker Audio building. Looking north on Peachtree from 10th Street you could see the tower.
ClintG