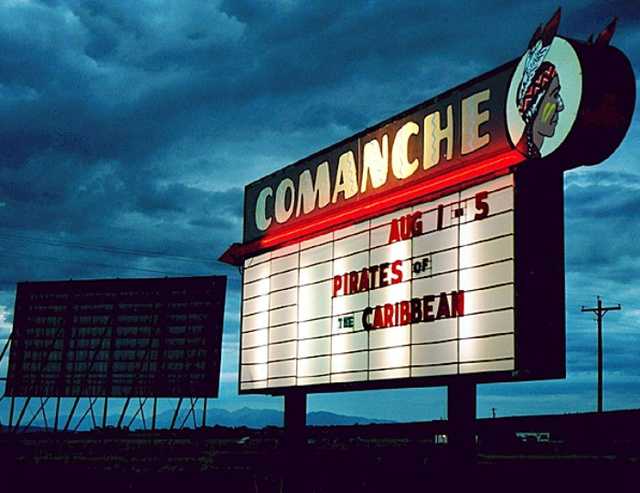 The Comanche Drive-In in Buena Vista, Colorado is not closed but its future is up in the air (no pun intended). The theater was open intermittently throughout the ‘07 season due to sound equipment issues. On May 8th of 2008, the owner’s wife very suddenly and unexpectedly passed away right before the drive-in was to reopen, so needless to say, the drive-in never opened that year. John Groy,the owner (who also built the theater) is about 80 years old and his wife was some 15 years his junior so I personally suspect that she had quite a bit to do with the theater’s upkeep and management. It is still unknown if it will reopen this year. It may be a good idea to give Mr. Groy a call and encourage him to open up for '09.

I would also like to note that this is a very original drive-in. It still runs 2 thousand foot changeover, on two RCA projectors with a carbon arc light source.

Here is another marquee photo:
http://tinyurl.com/y6rv77g

Surprizes me they can even use Carbon Arcs.thought OSHA banned them.

Address above is incorrect. Approx. location of this drive-in is on County Road 339, just south of County Road 306.

Anthony L. Vazquez-Hernandez’s article link from Sept. 2006 is now dead, but I found what it might have been at NewsLibrary.com (available through some public libraries, or with money). Vail Daily published an article on July 25, 2003 about the Groy family and the Comanche. A few highlights:

John Sr. and Pearl Groy (for whom Buena Vista’s indoor Pearl was named), opened the Comanche in August 1966. The drive-in lost its final 40 in-car speakers “to lightning” in 2002. At the time of the article, they were still using a two-projector system instead of a platter.

Boxoffice, Oct. 16, 1967: “John Groy has opened his new Comanche Drive-In at Buena Vista, Colo. It has a 250-car capacity and operates in conjunction with the Pearl Theatre.”

The first reference I could find in the local Chaffee County Republican was on its front page on July 14, 1967. “The first drive in theatre to hit the pike in the Buena Vista area, The Comanche, is now open and showing nightly at 9:00. Now showing is "Island of Terror”, one you shouldn’t miss!“ The first Comanche ad I could find was in the next issue on July 21.