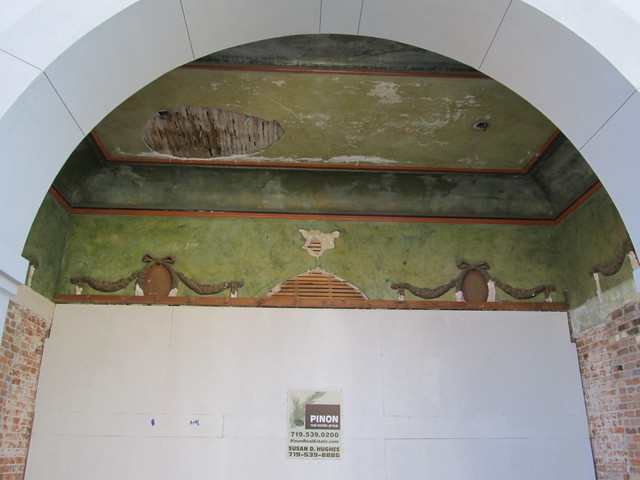 The Salida Opera House opened as an opera house on New Years Day, 1890. It was closed from 1901 to 1914 when it reopened as the Empress Theatre screening movies. Later being renamed Salida Theater, it suffered damage from a fire in 1942. It was repaired and was lakst known as the Unique Theater. This theater is truly, as its name suggests, unique. I have never seen one quite like it. It was a cavernous Art Deco style theater.

It was owned by John Groy, whose parents owned it before him. They obtained it when they traded their drive-in theater in Salida with the owner of the Unique Theater for the theater. The Groy Family also owned the Comanche Drive-In and Pearl Theater in Buena Vista, Colorado.

The theater operated Friday through Tuesday but was closed briefly as of August 2006 for some structural repairs. Sadly, it never reopened. The auditorium was demolished in 2011. The front section of the building was retained and converted into retail use.

It was very large and so was the auditorium. According to the Film Daily Yearbook of 1942, it is listed as the Salida Theater (it’s name at the time) as having 600 seats. It still had around that many seats when it closed.

A photo taken in April 2007 of the Unique…sorry to hear this local treasure is endangered!
View link

It appears that what little remains of the Unique is yet again in peril. The current owner seems to be having trouble coming up with the funds to complete the renovation and would sooner just bulldoze the entire thing than mess with it anymore and the city is demanding that the owner clean up what he started or else they will demolish it and repossess the land. You can read about it all at the Salida Mountain Mail (newspaper) website…simply search “Unique Theater”.

Anyone have more info or more photos, especially of the interior.

The Opera House in Salida is listed in the 1897-98 edition of the Julius Cahn Official Theatrical Guide. G.W. McGovern was Mgr. It had 850 seats, was on the ground floor with tickets costing from 25 cents to $1. It had the “Edison system” of electric lighting. The proscenium opening was 25 feet wide X 15 feet high, and the stage was 36 feet deep. There were 2 newspapers and 3 hotels for show folk. The 1897 population of Salida was 3,500.

My parents, Lewis R. and Mary A. Groy, owned the property and renamed it as the Unique Theater from 1965 through 1991, at which time my mother sold it to my half-brother, John. It has, unfortunately, since slowly degraded to the point where it has been destroyed due to negligence. So sorry to see a historical landmark fall victim to lack of concern.

An Architectural Inventory Form prepared for the Colorado Cultural Resource Survey in 1981 (PDF here) says that the Salida Opera House was dedicated on January 1, 1889.

The Mountain Mail, June 2, 1966: “Thursday installation of the new marquee at the “new” theater in Salida was completed. At the same location as the Salida Theatre, Lewis Groy has completely remodeled the theatre inside and out and has given it a new name, the Unique. With close to 500 seats downstairs on the completely new concrete floor and with the inside and out showing a new coat of paint, the place really has the “new look.” ”

The Mountain Mail had an article on June 21, 2018 that provided the full history.

The building went up in 1888, replacing the Craig Opera that had burned down. The first event in the new Salida Opera House was a New Year’s Ever party featuring light from 75 electric bulbs.

The theater shut down from 1901 to 1914, when it reopened showing movies as the Empress Theatre.

A fire in January 1942 gutted the rear of what had become the Salida Theatre. It was renamed the Unique in 1966, “when it was owned by Louis (sic) and Mary Groy.”

In 2007, the city condemned the building. That year, Salcat Industries, owned by Bobby Hartslief of South Africa, bought the Unique and stabilized the building. In 2011 new owner Tim Pollak of Florence, Italy, razed the back of the building to save the front 40 feet and its façade. Later that decade, the inside was converted to three storefronts on the first floor and three condos on the second, and that’s what it looked like at the time of the article.