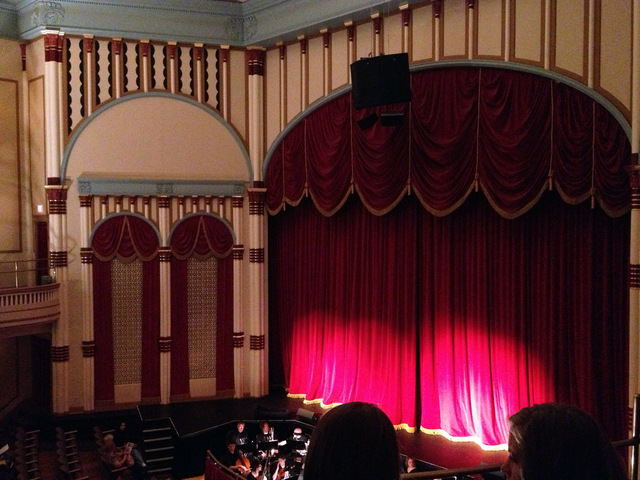 Designed by architect Willoughby J. Edbrooke the Grand Opera House opened August 14, 1890. It was remodelled in 1910 to the plans of architectural firm Rapp & Rapp. Until 1930, the Grand Opera House featured names like George M. Cohan, Lillian Russell, Ethel Barrymore, and Sara Bernhardt on its stage. Even “Ben Hur” was staged there, complete with chariots, horses, and elephants.

In 1930, the theater’s second balcony was removed, reducing the seating capacity from 1,100 to 644. A signifcant change, as the Grand Opera House had been the largest theater ever built in Dubuque. Projection equipment was also installed and the theater became known as the Grand Theatre.

Movies continued for another 58 years, until 1986, when the Grand Theatre was purchased by the Barn Community Theatre and has since returned to live theatre, and is once again known as the Grand Opera House.

The Grand Opera House is listed under “Dubuque Iowa” in the 1897-98 edition of the Julius Cahn Official Theatrical Guide, an annual for roadshow producers. The seating capacity is given as 1,350 and ticket prices range from 25 cents to $1. William Roehl was the manager. The theatre was on the ground floor and had both gas and electric illumination. The proscenium opening was 35 feet square and the stage was 36 feet deep. There were 7 members of the house orchestra. The town was served by 4 railroads and had 4 newspapers. Hotels were the Julian, Larimier and Merchants. The 1897 population of Dubuque was 40,000.

The Grand has been undergoing a large and complete renovation. From their website, 2001.

Thanks to local support of the Grand’s cultural role in the community, an ambitious three-phase theater restoration is underway.

Phase I of the restoration will be completed later this month (this was completed in October 2001). The marquee and metal panel siding, which were added to the building in the 1960’s, have been removed to repair brick and stonework. The opera house’s exterior – Dubuque brick with a facade of St. Louis pressed brick – has been restored to its original beauty.

Over 30 windows, including the monumental semicircular one on the fourth floor, have been either replaced or repaired. Other exterior work includes a new slate roof and copper roofing for the bay windows; new copper gutters, downspouts, coping and flashing; and dormer restoration.

The first phase of renovation has also included interior work. Projects completed to date are:

Comfortable, refurbished theatre seating for 640
Restoration of the beautiful original maple wood flooring
Upgraded lighting, sound, speaker, and stage electrical systems
Air conditioning in the sound and light booth
Upgraded hearing assistance devices
These completed projects have created a solid foundation to continue and expand this major restoration effort. While the goal is to preserve the historical look of the ‘grand’ old facility, the foundation and operating boards are striving to upgrade and prepare it for another century of performances.

Fundraising plans are now underway for Phase II of the restoration, which will include the lobby, foyer, stage, fly-space, and public restrooms. Phase III of the multi-year project will cover restoring the auditorium and improving the staff offices and rehearsal hall.

The April 30, 1910, issue of The American Contractor said that the Dubuque Opera House was to be remodeled. The architects for the $70,000 project were C.W. and G.L. Rapp.

The page gives the opening date of the Grand Opera House as August 14, 1890. Photographs reveal the exterior style of the building to be Romanesque Revival. I’ve been unable to discover any photos showing Rapp & Rapp’s 1910 interior.

Rapp & Rapp did work on the Majestic at 4th & Main, Dubuque. It was sometimes referred to as an opera house, although the specialty was vaudeville. I was involved in the 1975-76 renovations.

Most recently I managed the Grand in Dubuque. It has been a legit theater again since 1986. They still have a large screen and in the recent past we hosted showings of silent films with live orchestra. The promoters then moved to the Five Flags Center (restored Majestic) because of more reception space in the adjacent arena area.

Both are beautiful facilities in this town of 65,000. Amazing!