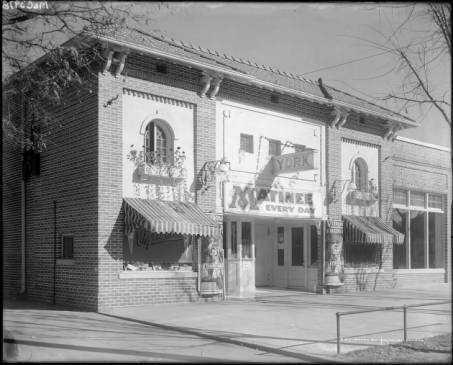 The York Theater (2221 East Colfax Avenue) opened in September 1913. It was a movie theater up through 1919. The original building is still in existence and is a Seiko Watch Repair store.

Photo of The York theatre

It seems to me that the building in the picture is different from the what is at the actual location.

The existing building is the same one the theater occupied. Two buildings, the theater and its neighbor, were visually integrated at some time by having the theater building’s roofline extended across the front of the adjacent building, so the building now looks twice as wide as it did in the old photo of the theater.

Also, the facade details have been removed, the second floor windows filled in, the intricate pattern of the face brick painted over, and the tile has been removed from the roof, but the distinctive brackets under the eaves can still be made out in the Google street view if you zoom in.