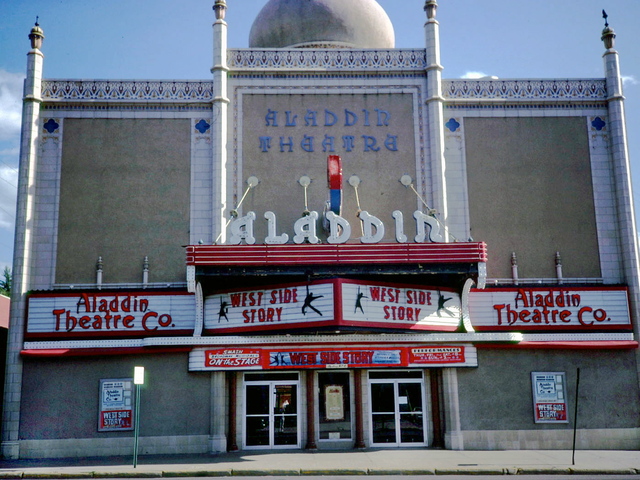 One of the city’s most celebrated neighborhood theatres opened in October, 1926 to great fanfare. The premier was covered by a throng of reporters and was attended by some of Denver’s most notable names. Flowers piled high and telegrams arrived from Hollywood studio heads and movie stars.

The public was held in awe at what they found inside: thick, luxurious carpets in jade green, wide, plush seats, an expansive auditorium ceiling painted sky blue with hundreds of tiny, twinkling lights that looked like stars when the house lights were turned down, a completely equipped nursery, a large waiting room and an exotic smoking lounge. They found Arabian murals and decorations, and even a bubbling fountain. Everything inside was worthy of Ali Baba himself, down to the drapes and furnishings, wrought iron and blown glass hanging lanterns and standing lamps.

It was truly “The Arabian Nights Meets the Rockies”. The auditorium had a large orchestra pit and a 14 rank electric theater organ. When movies weren’t being shown, the screen was lifted to expose the large stage, big enough to hold almost any entertainment venue.

Opening night featured a short organ concert followed by a soprano solo of “Allah’s Garden of Roses”, which was written especially for the premiere. That was followed by “A Dream of India”, and several numbers played by Dahl’s Arabian Nights Orchestra. A stage show included a bevy of girls in blond wigs and black shorts and tops dancing the Black Bottom. The first movie shown at the Aladdin Theatre was “Across the Pacific”, starring Monte Blue and Myrna Loy.

The Aladdin Theatre opened in the days of the silent movies, but management was quick to pick up on the latest technology: sound. Although a few theatres in Denver had experimented with the sound process, in February, 1927 the Aladdin Theatre had a showing of its first Vitaphone film, “Don Juan”, starring John Barrymore, grandfather of actress Drew Barrymore. The film featured synchronized music and a short lecture by Will Hays, Hollywood movie czar. Later that same year, the public was treated to a run of “The Jazz Singer”, with Al Jolson, which is generally recognized by movie historians as the film that ushered in the talkies.

The Aladdin Theatre was built on a site formerly occupied by a mansion belonging to Ed Chase, an early theater owner and well-known gambling kingpin.

The Aladdin Theatre enjoyed a long, successful run as a first-run movie house. It survived after many of the big screen theatres downtown had closed their doors. It even survived the introduction of television to Denver - for a while, at least. The theatre tried beefing up its patronage by showing cutting-edge films such as “The Moon Is Blue”, with William Holden, a racy (for its time) story about a love triangle, and “The Man With the Golden Arm”, a movie about a strung out junkie, starring Frank Sinatra. The neighborhood kids weren’t left out, though. Saturdays were the days when children would pack the theatre to see the latest Western or sci-fi flick, usually followed by a talent show or yo-yo contest, where prizes were given: anything from free passes to a brand new bike.

In the late-1970’s, revenues started to slip, in spite of showing such Hollywood hits as “The Omen” and “The Duchess and the Dirtwater Fox”. Part of the reason was the continuing flight by many to the suburbs, the growing popularity of the smaller multiplex theatres, and the decline of the Aladdin’s neighborhood in general.

In June 1982, Aladdin management decided to drop film fare entirely and replace it with live theatre. The interior was remodeled to accommodate the necessary scenery, and the seating arrangement was reduced to a smaller, more intinate design. A liquor license was applied for, and a team of non-union actors was formed as a sort of in-house troupe. The offerings over the next few years included “West Side Story”, “Man of La Mancha”, “Pippin”, and “Pirates of Penzance”. While this venue was mildly successful, it never really caught on. Reasons varied, one of which was that, by then, Capitol Hill had gained a wide reputation as a rough neighborhood, and many people were reluctant to travel to the area, particularly after dark.

By 1984, the Aladdin Theatre was up for sale. City council gave the okay to level the theatre for a planned retail and condo complex. Nothing ever came of it. Capitol Hill United Neighbors (CHUN) wanted the theatre designated an historic landmark, a prospect that was fought by the current owner. After a few meek attempts to find a use for the aging building, including a proposed restaurant and nightclub, the Aladdin Theatre was wrecked in August, 1984 to make way for a Walgreen drugstore.

This one should be tagged as demolished.

The information from the 1970’s on in the article contains a few inaccurcies and omissions. I want to correct these, especially since there is an important lesson here for anyone concerned about historic preservation.

It is true that the Aladdin was the first theatre in the region to offer sound. A new, much larger screen, was added in front of the stage and the sound system was updated in the mid 1950’s to offer 70mm and 6 track stereo sound and it became one of the premier roadshow houses in the region. It presented “The Sound of Music” in the mid 1960’s for several years because it was so successful. It had many successful runs going into the early 1980’s including showing “Earthquake” in Sensurround and “Star Trek”.

During that time it was leased by National General Corp., which later became Mann Theatres, from the heirs of the owner that built the theatre. When the lease expired Mann theatres chose not to renew it, seeing the trend towards suburban multiplexes.

The theatre was dark for a while until it was leased by a local live theatre impressario named Robert Morise. Morise removed the sound system and screen to reveal the stage for live performances (including revealing the fountains on either side of the stage which were concealed by the screen). This made it costly to reinstall a film system. That proved to be the theatre’s undoing when Morise’s company, the Aladdin Theatre Co. folded several years later.

The theatre sat dark, now owned by a new individual who had purchased from it from the heirs in the intervening years. He was approached by an architect who had a vision of creating an apartment building with small efficiency apartments on the site.

An organization called Friends of the Mayan had successfuly obtained a landmark designation from the Mayan Theatre sometime earlier, not CHUN (Capital Hill United Neighborhoods) as mentioned). I assisted them in that effort with the understanding that they would assist me in saving the Aladdin after that. When we learned of the plan we spoke in front of the Denver City Council in an attempt to have the Aladdin designated a landmark to preserve it. The council was concerned that there was no future for inner city theatres but, as I pointed out to them, the Aladdin has always done well when it had a successful film and someday new theatres would come back into downtowns, but never build a theatre like the Aladdin again. (This proved to be true when AMC Theatres built a multiplex downtown some years later.)

The landmark designation was eminent but there was a 90 day waiting period before it would take effect. During that time the owner, realizing he would lose his ability to redeveloping the land, razed the theatre with no notice to avoid public outcry. We learned about it at the last minute and were able to take some final photos (in near darkness inside) before some the artifacts were removed and the building was demolished.

A tragic and senseless end to what was the most beautiful atmospheric theatre in the Rocky Mountain region. Had the Aladdin survived, I’m confident it would be a unique and successful showplace for Denver today.

Around 2006 a small multiplex was built on east Colfax, not too far from where the Aladdin once stood, which currently shows art films.

The LakeRidge Theatre is not yet listed, Tinseltoes. Most of the sources I’ve found say it was in Lakewood, Colorado, though one source says it was in Wheat Ridge. The Boxoffice article says it was on Wadsworth Boulevard, and an item in a 1973 issue of the magazine Science of Mind says that the Denver Church of Religious Science was holding Sunday morning services at the Lakeridge Theatre, on Wadsworth and W. 17th Avenue. That puts it in the Edgewood district of Lakewood, just south of Wheat Ridge.

Saw “The Omen” here when it was released.

Wishing there was a way to favorite Rich Vincent’s comments – the insights round out a lot of questions for someone who grew up with Denver’s amazing-but-now-gone theaters but wasn’t old enough to know the backstories.

It was 50 years ago today that “The Sound of Music” premiered at the Aladdin. With a reserved-seat run of 112 weeks, it’s almost certainly the long-run record holder for this venue. (Anyone know of something that ran longer?) It was one of ten runs in the United States and at least 24 globally that ran the movie continuously into a third year.

“The Sound of Music” also was, I believe, the second of two consecutive long-running Julie Andrews movies to play this venue between 1964-67. That 31-month period must’ve been bliss or hell for local moviegoers depending on whether or not they were a fan of Julie!

I recently read that on August 5, 1960, John Wayne’s company Batjac held the first preview of THE ALAMO at the Aladdin in Denver prior to it’s premiere in San Antonio, TX in late October. Can anyone verify this?

no intro can be perfect but it doesn’t mention that this theater was one of the leading roadshow houses in the 1952- 1972 period.

Boxoffice, June 1982: “The Aladdin Theatre located in East Denver was closed by Mann Theatres. The 1,000 seat facility is the last of the luxurious theatres built in the early Thirties in the downtown Denver area.”

I’ve put together a booking history for the Aladdin, from 1947 up to 1978 so far, in case anyone might like to know when a particular movie played there. I’ll be happy to share my research with you. Take care – Ken Mitchell ()