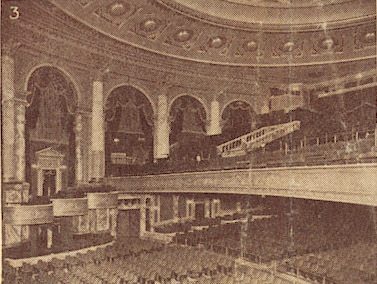 The first Fox Theatre to open in Philadelphia, opened on November 26, 1923 with Edmund Lowe in “The Silent Command”, a Moller theatre organ, and 2,423 seats.

The Fox Theatre was designed by architect Thomas W. Lamb for William Fox. The hexagonal box office was made of a marble base supporting hand made bronze pillars with a heavy brass dome. The lobbies and office structure were built on the same design as Loew’s State Theatre in Times Square, New York. It was also compared to the Capitol Theatre, Times Square, New York. Beside movies, the Fox Theatre had a Grand Orchestra whose stage shows were produced by staff, and in-house radio broadcasting facilities aired the shows twice weekly. The huge stage had a sixty foot wide proscenium and a ninety feet wide backstage. The projection booth was accessed via the fourth floor of the Fox Building, rather the inside the theatre.

Warner Bros. first sound picture, “The Jazz Singer” was shown here and also at the Locust Street Fox Theatre. A 1931 proposal to sell the Fox chain to Paramount did not succeed as other Fox theatres were in the red, though Philadelphia’s Fox was profitable. In July 1932, Alexander Boyd (who no longer operated the Boyd Theatre) began operating the Fox Theatre as well as the Locust Street Fox Theatre. From August 1, 1936 until October 5, 1945, Stanley Warner tookover operations. After 1939, stage shows were discontinued and only movies presented. “The Grapes of Wrath” was shown in 1940. Philadelphia’s Fox Theatre and South Bend hosted the simultaneous world premiere of “Knute Rockne All American” on October 4, 1940.

On October 5, 1945, 20th Century-Fox resumed operation of the Fox Theatre. The theatre was renovated with drapes covering much of the ornamental plasterwork. In 1946, the Fox Theatre hosted the world premiere of Jerome Kern’s “Centennial Summer”. To conicide with Philidelphia’s hosting of the political convention, in June 1948, Fox held the world premiere of the film noir “The Street With No Name”. Films showcased included “All About Eve” in 1950, “The Robe” (the first CinemaScope film), and “Three Coins in a Fountain” in 1954. On September 27, 1952, National Theatres Inc. took over the theatres of 20th Century Fox. According to somebody who asked staff, when ‘scope films arrived, the organ console was removed to the alley and burnt.

The Milgram chain, which had 80 screens outside of Philadelphia, leased the Fox Theatre starting in 1959, and purchased it in 1961, making it their flagship. They renamed the neighboring Stanton Theatre as the Milgrim Theatre. Recollections of a projectionist who worked at the Fox Theatre in 1976 were that a supervisor was sent with a white glove to make sure the projection lense were totally clean, and that the basement housed changing rooms for ushers and a well organised collection of film posters. The stagehouse was converted in 1971 into the Stage Door movie theatre.

As one of the most elegant theatres, the Fox Theatre was a favorite of Main Line ladies. The theatre always had top notch projection and sound. Housing local offices of all the major movie chains and a 17th floor screening room, the Fox Building became movie exhibition headquarters for Philadelphia.

The Fox Theatre closed March 1980 after a run that began in Christmas of “Star Trek: The Motion Picture”. The screen size upon closing was 54 feet wide and 23 feet tall. The owner asserted it would cost over a million dollars to repair the plaster in the auditorium, much of which had been draped over. The Committee to Save the Fox did not. There was discussion that an office tower would be built over the Fox Theatre, but the entire Fox Building, including the theatre was demolished instead. The Milgram company stated they might build a 2,500 seat triplex within the new office tower, but no movie theatre was included. To see the theatre’s former footprint, realize that the black glass office skyscraper that rose in its place is the only building in the square block bounded by 16th and 17th Streets, and Market and Chestnut Streets, that is not part of the Liberty Place complex.

When the Fox Theatre was demolished in 1980 some of the 87,000 tons of marble used for the auditorium (in 15 varieties, imported from Italy) were sold for various things. The marble balcony railing is now used as the communion railing at Holy Cross Catholic Church in Springfield, PA. The ticket booth was shipped to Los Angeles and the chandeliers to Columbus, Ohio for a theatre restoration project.

I asked Vince Young, who frequently contributes to this site, where in downtown Phila. did “Butch Cassidy and the Sundance Kid” play, and also “The Deer Hunter” and he has ok'ed my posting his reply:

opened 10/01/69 @ The Fox. What a wonderful opening day that must’ve been…Fox had been running a double-bill of Bullitt and Bonnie and Clyde previously, and the 10/1 “all day prevue day” was BC and Bullitt together. Makes me recall some of the amazing “prevue day” double bills that were here locally.

Am glad you asked about Deer Hunter. I thought there was something a bit historical about its run here, and it seems that it may have been the last “reserved Performances only…tickets on sale for first six weeks” engagement that I can remember here. It opened Friday 02/23/79 @ The Stagedoor. Two shows daily, three on weekends.

The Deer Hunter did reserved performance engagements in other big cities around the country.

Yes and what a marquee.

Click here for an exterior view of the Fox and Stanton Theatres in 1929.

Among the films I saw here were “The Birds”.

If this opened on November 26th, 1923, why did the amusement section carried no ad for this theatre?

Like my beloved Boyd theater this was another example that the city of Phila doesn’t give a damn about preserving any of the historic old theaters. They are now all gone which is a disgrace.

September 1st, 1971 grand opening ad for the Stage door can be found in the photo section.