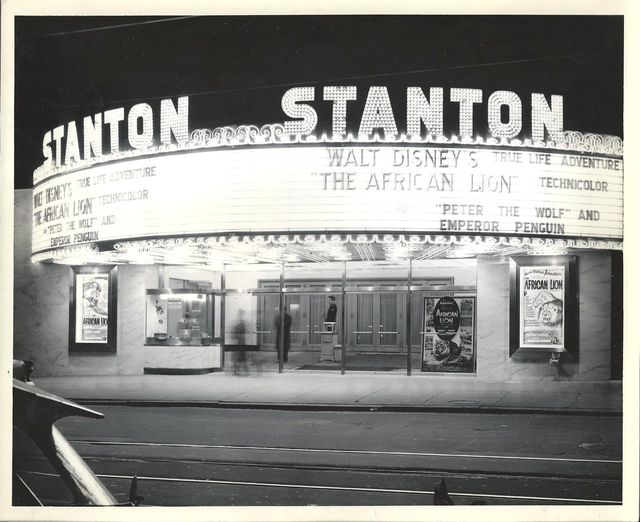 This cinema showplace had 3 names, with Stanton Theatre lasting the longest, but as Milgrim Theatre was the most recent name, it is so listed here on Cinema Treasures.

Originally opened as the Stanley Theatre on April 25, 1914 with the movie “The Sea Wolf”. The theatre was named after Stanley Mastbaum, president of The Stanley Company, and was the flagship of the theatre chain. Designed by architect William H. Hoffman, the facade was in white terra cotta. The auditorium was decorated with designs in plaster such as cupids. The theatre had a 3 Manual / 28 Rank, classical Austin organ. A symphony orchestra was organized in 1915 to accompany the silent films.

When the Stanley Company built a larger (4,000-seat) movie theatre at 19th Street and Market Street, to be their new ‘Stanley’ flagship, opening January 28, 1921, this older Stanley Theatre was renamed Stanton Theatre. Only the last three letters on the signs had to be changed.

The auditorium was rather steep, so in 1955, as the ads boasted, ‘Philadelphia’s Only Theatre Escalator’ was added for access to the balconies. In 1956, architect David Supowitz oversaw renovations, including a new white marble facade and huge, curved marquee. An almost all-glass box office was installed at the front, replacing the old one. The lobby was expanded and redecorated with a new luminous lobby ceiling and panels. To install a wider screen, the auditorium side boxes were removed.

At this downtown movie palace, until about 1958, ‘B’ pictures including action films, low-budget westerns, and double features were exclusively shown before being distributed elsewhere in the Philadelphia region. Action films were frequently featured. Popular horror films were showcased at both the Stanley Theatre and the Stanton Theatre, with the Stanton Theatre getting the ‘B’ horror films. George Raft appeared in person at the opening of “Loan Shark” in May 1952. The world premiere of “The Fighter” was hosted May 29, 1952 with star Richard Conte appearing in person at the theatre. Bob Matthias and fellow athlete Jesse Owens appeared in person on the stage in 1954 for the local premiere of the movie “The Bob Matthias Story”. “Rumble on the Docks” was shown in 1957 with star, South Philadelphia native, James Darren appearing in person at the Stanton Theatre. In the summer of 1957, Sal Mineo appeared in person for the opening of “The Young Don’t Cry”. Frankie Avalon, Dick Clark and other stars of the movie musical “Jamboree” appeared in person on the stage in November 1957 for the movie’s world premiere. In 1958, the ‘B’ picture policy changed as “The Defiant Ones” ran most of the summer followed by the Oscar winning “I Want to Live”. In 1960, this former flagship Stanley theatre again hit a highlight of its long life as it hosted a reserved seat roadshow presentation of “Cimarron”. “In the Heat of the Night” was shown in 1967.

Here is a November 1959 photo:
http://tinyurl.com/nlscbr

Having seen Khartoum at the AFI Silver this weekend, I asked Vince Young where it originally was shown in Center City? I had it in Boyd notes but that was incorrect. Vince replied it was shown here at the Stanton aka Milgram.

My father managed the Stanton in the late 1950’s to 1964 .I was 8 and would get friend and we would go from movie to movie all over downtown Phila for free.They knew my dad and me. It was cool.And I would go to Dewey’s and get a dog in a bread roll.You did not have the fear that you would have today doing that .Today my Dad or I could do that.I remember Hatari played at the Stanton. 1962 ! John Wayne and Red Buttons came to the Stanton! I saw them! The Duke How Cool Is That ! I wish I would have saved all the movie poster my dad would bring home . OH The good old 1950’s and 60’s

This reopened as Milgram on July 3rd, 1968. Grand opening ads in photo section.