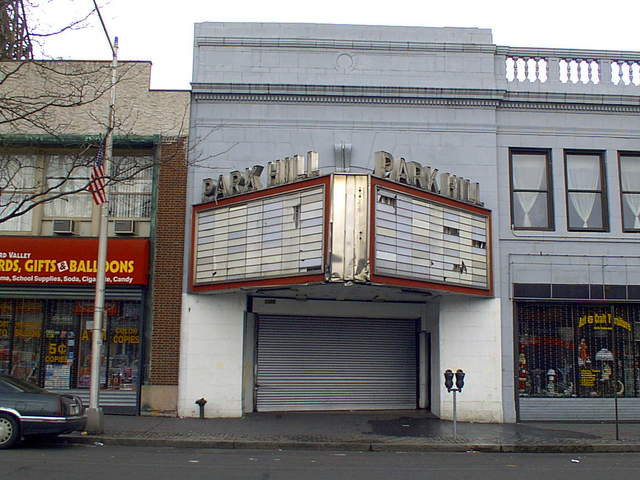 The Park Hill Theatre opened on April 7, 1926 with Madge Bellamy in “Sandy”. In later years it became one of the few theatres in Westchester County that were operated by the Cinema 5 chain. It was closed on June 30, 1982 with Kurt Russell in “The Thing” & Kirk Douglas in “The Final Countdown”.

Cinema 5 were was a chain of art houses originally called Rugoff Theatres. They were the company who built Cinema 1-2 among others.

The Park Hill was triplexed by its last operator. It closed in the early 90’s after their business was severly impacted by the National Amusements Cross County 10-plex nearby. The theatre building housed a church in the late 90’s, but was recently put up for sale again. The marquee is still on the building. It is the last of the downtown Yonkers theatres still standing in its original configuration.

Could anyone give a brief history of the Park Hill? I assume that by the looks of the exterior it was built in the early 30’s.

I recollect Park Hill as a very nice theater, around 1970 or so. We used to drive over from Woodlawn, to see flicks here. The only real problem was finding a parking place nearby. The neighborhood deteriorated, later.

Here’s a PDF of a report about the Park Hill Theatre, with history and photos. Published in 2004.

Was the Parkhill in Yonkers ever used as a nightclub known as The Enchanted Room? Postcards of the Enchanted Room identify it as being located at 423 S. Broadway in Yonkers. Singer Jerry Vale got an early start there.

The Enchanted Room was located diagonally above the theater. The Facebook page “I Grew Up in Yonkers” has gone into detail about it..

Yonkers' original Park Hill Theatre was a photoplay house that opened on South Main Street November 19, 1912 but was closed and ordered divested by a court in 1913. The building was home to a Ford auto dealer. But the name would get another chance at another South Main location – this time a new-build facility.

The moniker would be used by Matthew Chyrstmos with the new Park Hill Theatre opening April 7, 1926 with a World Premiere of the film, “Sandy” (1926) starring Madge Bellamy supported by the Park Hall Orchestra, an Aesop’s Fable cartoon entitled, “A Moral and a Smile, a Mutt and Jeff cartoon entitled, “A Kick for Cinderella,” a partially animated short, “The Voice of the Nightingale,” a comedy short, “The Married Life and Helen and Warren” and another comedy short, “Moving Day.” That same film title had opened The Park Theatre in the Warburton Building less than two months prior but it was the 1925 version with Colleen Moore.

On November 10, 1929, the theatre added sound to stay relevant. The Theatre appears to have closed on June 30, 1982 with a double feature of “The Thing” and “Final Countdown.”