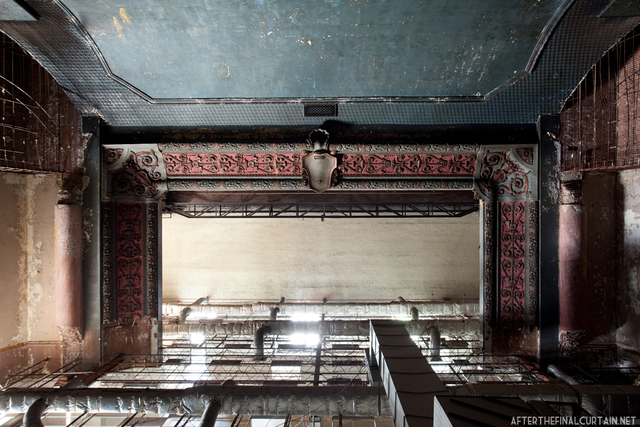 Proctor’s Theatre first opened on January 16, 1916, primarily as a vaudeville house, with short movies shown only as a prologue to the live programs. Architect W.E. Lehman used a blend of French, Italian and Flemish styles for the auditorium, which was situated behind a six-story office building that contained the theatre’s entrance and lobby.

Movies gradually took over at Proctor’s Palace Theatre, which became part of the RKO circuit in 1929. At that time, “Palace” was dropped from the name and the theatre became known as RKO Proctor’s Theatre, though in the circuit’s newspaper advertising it was listed as the Yonkers to denote its location. Of four RKO theatres in Westchester County, all but the White Plains Theatre were built by F.F. Proctor.

RKO Proctor’s Yonkers closed around 1975 or 1976, and was later converted into office and retail space.

CORRECTION: This theater did not close in 1973. Closed around 1975 or 1976. I saw “Snuff” in this wonderful theater that supposedly still has it’s stage intact per comments from city officials who are exploring reopening it as a playhouse. This theater ran some big first runs into the early 1970’s like “The Exorcist” and “The Godfather” etc. On the north side of the building, “RKO Proctors” is still painted in white and visible to this day.

I saw Robert Mitchum and Shirley MacLaine onstage at the Proctor’s to promote “Two for the Seesaw.” Also saw “House of Wax” in 3-D and “House on Haunted Hill” where a skeleton slid down a wire from the balcony to the stage toward the end of the movie.

On Saturday January 27, they appeared at the RKO Yonkers at 3:10 PM.

Scenes for “Sweet Daddy” starring Tweedy (a/k/a Marcel Perez), a comedy short made at the Mittenthal studios in Yonkers, were shot in the theater in May 1921 at a big event honoring the Shiller Bros. “Sweet Daddy” survives in 35mm at the Library of Congress. I’ve seen the film a couple times; the footage of the interior of the theater show a packed house and views of the theatre and state.

My name is Stacie and I am a Producer working on a new series for a cable network. We will be filming at this very theater on Friday. I’m wondering if any of you would be able to provide me with some information. Bob, you mentioned Jerry Lewis being at this Theater promoting a movie. If anyone could please give me a call my number is 646-674-3043 and my name is Stacie

I recently photographed the Proctor’s Theatre in Yonkers. Check out this post
for some photos and a small write up.

A picture showing the theater’s marquee can be seen here.

On Thursday 28 December 1950, Bela “Dracula” Lugosi presented his in person Horror and Magic Stage show at Proctor’s Palace. Currently I am conducting research on all things Lugosi; if anyone out there actually saw this show and/or has memorabilia (poster, handbill, photos) related to this show, please contact Bill at Thanks in advance for any assistance!

Three people were killed at the Proctor’s and twelve others injured on February 23, 1934 in a basement explosion blamed on accumulated gases. The dead included Patrolman Patrick Whalen, Carl Gruber, an electrical engineer, and James Frazier, 31. The blast ripped out the Proctor’s lobby and wrecked a car outside.