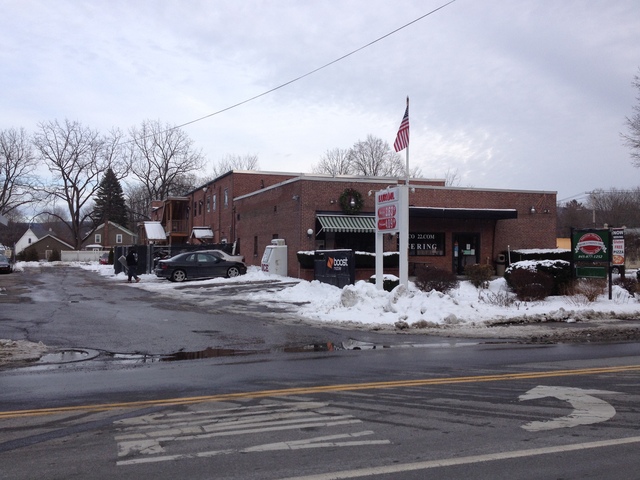 I visited this theater many times when it was open. I worked the summers of 1978 to 1981 at a camp in Wingdale, the next hamlet south. A good night off from camp was dinner at Four Brothers Pizza Inn (still in business just down the block) and a movie at the Dover Theater. It was the only theater for a 20 mile radius. I clearly remember seeing Star Wars there in 1978, a full year after the original release.

The theater has probably been closed 20 years by now. The building is used as a deli and has been for almost the entire time that the theater has been closed. Although I haven’t been inside (I usually still get pizza when I pass through this town a couple of times a year), it appears that the deli is just using the lobby area. I would guess that the auditorium (400-500 seats) is probably just walled off behind the area the deli uses and most likely abandoned in the state is was when the theater closed.

I passed by this theater on May 11th and it has been turned into a sort-of strip mall (with most units still available for rent). The side length of the theater, which is against a parking lot, has been opened up and divided into individual storefronts. So I’ll assume that at this time, there is little chance of the auditorium being intact inside.

The Dover Theatre was opened on March 3, 1948, according to the item in Boxoffice of March 6. There were 725 seats. The owner was Tony (Anthony) Boscardine, operator of the Colonial Theatre at Caanan, Connecticut.

The July 27, 1946, issue of Boxoffice had said that Hartford architects Irving Rutherford and George Zunner were drawing plans for a new theater of about 750 seats in Dover Plains for “A. Boscardini.”

However, in this Boxoffice article from May 4, 1957, then-owner Frank Knickerbocker claims to have built the Dover Theatre (in 1938- probably a mistake.) Some light may be cast on the minor mystery of who originally owned the Dover Theatre by a brief item in Boxoffice of December 3, 1949, which said that Antonio Boscardine and his family had just returned from a tour of Italy. It mentioned his daughter, Mrs. Frank Knickerbocker. Sounds like there might have been some father vs. son-in-law rivalry going on in the family.

Linkrot repair: The 1957 Boxoffice article about the remodeling of the Dover Theatre is now at this link (the text continues on this page, but the only photos are at the first link.)

A larger version of the “before” photo of the auditorium appears at bottom right of this page of Boxoffice of January 8, 1949.