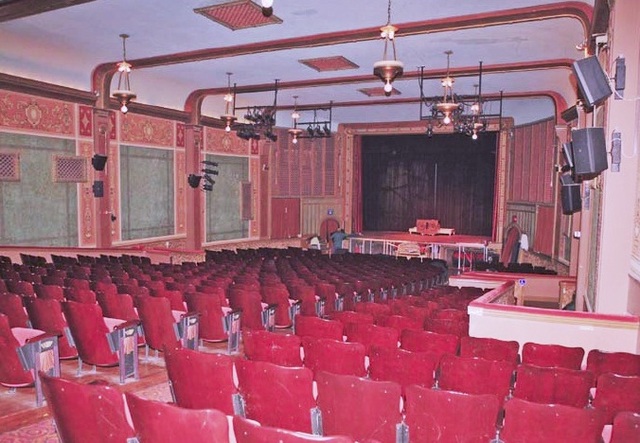 The Lincoln Theatre is a modified Mediterranean Renaissance style wonder theater in the heart of downtown, rural Mount Vernon, WA.

The theater’s ornate auditorium is characterized by stenciled plaster wall panels that simulate tapestries, gold beams across a ceiling of pale blue, a proscenium arch with red rosettes and striped serpentine columns, plus canvas awnings and painted grills on the organ lofts. One of the most notable features of the interior is the 2 manual Wurlitzer organ, which are increasingly rare.

The exterior of the theater features a yellow brick facade, with terra cotta rosettes and shields.

In April 1926, the Lincoln Theatre in Mount Vernon opens for business. Located at 712 S 1st Street, the venue costs roughly $100,000 to build, almost 25 percent of which represents the purchase of a Wurlitzer organ. Designed by architect William Aitken, the Lincoln exhibited a Spanish motif inside and out, with an interior swathed in blues, yellows, and reds. Furnishings and equipment for the venue cost a reported $32,500, making the Lincoln not only one of the most impressive buildings in Mount Vernon, but a genuine source of local pride. “Nothing like it has ever been constructed before,” gushed one paper, “… the theatrical world is setting back astounded.”
In addition to screening motion pictures through the years, the Lincoln also distinguished itself as a vaudeville house, particularly in the 1930s when it was part of the West Coast vaudeville circuit. Proving the old business adage that success is a function of location, it was a considerable help that the city of Mount Vernon is nicely situated between the larger theatrical stopovers of Vancouver, B.C. and Seattle. Although the Lincoln closed in the mid-1980s and faced an uncertain future, local groups rallied behind the venue and established the Lincoln Theatre Center Foundation. A tax-exempt organization, the Foundation engineered the restoration and reopening of the Lincoln in 1987, in large part due to the fundraising and volunteer efforts of the greater Mount Vernon community.
Today (2003) the Lincoln Theatre continues to serve the residents of Mount Vernon as a local performing arts center.