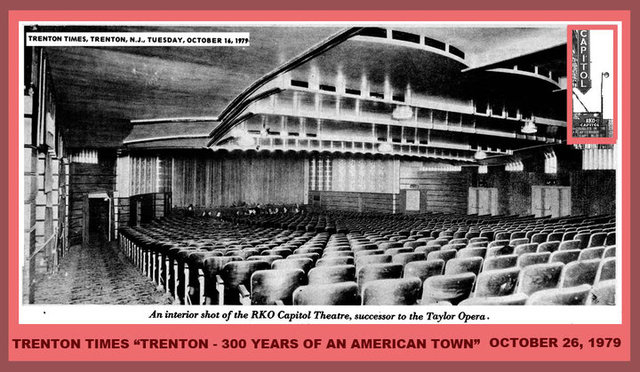 Opened as the Taylor Opera House on March 18, 1867, designed with 1,987 seats by architect Henry E. Finch. It was remodeled and enlarged in 1918 to the plans of architect W.A. Klemann. Listed in the 1951 FDY as operating, this theater closed as the RKO International 70 and was demolished around 1967.

“…State Street and Broad Street was the most important intersection in Trenton. A block south on Broad Street was the RKO Capitol Theatre. It was a very large theatre, probably had more seats than the Lincoln Theatre, and was RKO’s first-run "B” house in center city. It played shoot-em-ups and horror but couldn’t seem to make it with the upscale stuff. The theatre was built by a group of investors, one of which was Walter Reade, Sr. (The famous Walter Reade’s father) I’m not sure when it became an RKO house but I always remember it as part of that circuit.

Both the Capitol Theatre and the Lincoln Theatre and my father’s Stacy Theatre had those big marquees with chasers that were so typical of the old movie palaces".

As a youngster I recall going more times than I can remember to The RKO Capitol in Trenton. My folks and I lived across the Delaware river over in Yardley,PA and my mom and I would ride the bus to Trenton all the time to shop for clothes, go to the book store, have a pork roll for a quick lunch, a visit to the Planters Peanut Shop and catch a movie. The Capitol was a favorite of mine because it always showed the Horror and Action movies and outside around the box office the Posters and Lobby Cards for these exciting films always thrilled you as to what you’d be seeing that day and what thrills were coming up next week. I remember seeing a few of the 3-D classics there. One was the western titled “Charge At Feather River” in 1953. Wearing the 3-D red and green cardboard glasses the indian arrows flew off the screen at you. I also saw the classic horror film “The Creature From The Black Lagoon” in 1954. I saw from behind my fingers as I hid my eyes my first horror film in Colour(British spelling)The very frightening at the time “The Curse of Frankenstein” from Hammer Films in 1957. Also after leaving the theatre I could stop just up the street at possibly the largest newsstand in Trenton to buy all my DC Comics and Famous Monsters Of Filmland magazine. So The RKO Capitol will always have a special place in my heart and my early cinema going days.
By the way nowadays I still act in the movies but unfortunately I’ll never see myself at The RKO Capitol.
Richard

As Taylor’s Opera House, the Capitol in Trenton is listed in the 1897-98 edition of the Julius Cahn Official Theatrical Guide. Ormond Butler was the Mgr. The seating capacity was 1,765 and ticket prices ranged from 25 cents to $1. The theater was on the ground floor and there were 8 musicians in the house orchestra. It had both gas and electric illumination. The proscenium opening was 33 feet wide X 39 feet high, and the stage was 38 feet deep, 35 feet of which was behind the curtain line. There were 3 daily newspapers and 2 weeklies, and 4 hotels for show folk. The 1897 poopulation of Trenton was 90,000.

Theater was gutted by a fire on May 2, 1931, during a showing of “It’s a Wise Child” starring Marion Davies. Reproduction of newspaper story here.

In the late 60’s the Capitol also hosted rock ‘n’ roll shows, like James Brown, the Diana Ross and the Supremes, etc. It had a great stage, back from the days it was the Taylor Opera House.

The “Encyclopedia of New Jersey,” edited by Maxine N. Lurie and Marc Mappen, says that the Taylor Opera House was built in 1867, and had been designed by architect Henry E. Finch. Within twenty years of opening it was remodeled, the roof being raised to accommodate a second gallery.

An item datelined Trenton in the February, 1918, issue of construction trade journal The Bridgemen’s Magazine might be about a remodeling of the Taylor Opera House. It says: “Taylor Opera House, South Broad street, having plans prepared by W. A. Klemann, architect, First National Bank Bldg., for theater. About $100,000.”

Then the March 9, 1918, issue of trade journal Domestic Engineering said that construction bids were being requested for a “…$100,000 theater, Trenton, N. J., Taylor Opera House….”

It’s possible, though, that the project was not a rebuilding of the Taylor, but the construction of some other theater. An item in the August 14, 1915, issue of The Moving Picture World mentions the Trenton Theater Building Company, owners of the Taylor Opera House and Trent Theater in Trenton. As the company already owned two theaters, it’s not impossible that they were adding an entirely new third house to their holdings.

August 26th, 1921 grand opening ad has been posted in the photo section.

RKO’s Capitol Theatre was enlarged following the 1931 fire. The August 6, 1931, issue of The Film Daily ran the following item about the project:

“Trenton, N. J.— The Capitol, RKO house, will have its seating capacity increased to 1,850. Plans also call for a cooling system and fireproof roof, in addition to the rebuilding of the interior.”

On Tuesday 26 December 1950, Bela “Dracula” Lugosi presented his in person Horror and Magic Stage show at the RKO Capitol. Currently I am conducting research on all things Lugosi; if anyone out there actually saw this show or has photos of Lugosi related to this show, please contact Bill at I already have the ads, photos and articles published in the local newspaper of the time. Thanks in advance for any assistance!

At one point, the Capitol had a capacity of more than 2000. It was next to Kresge’s side entrance on South Broad Street.