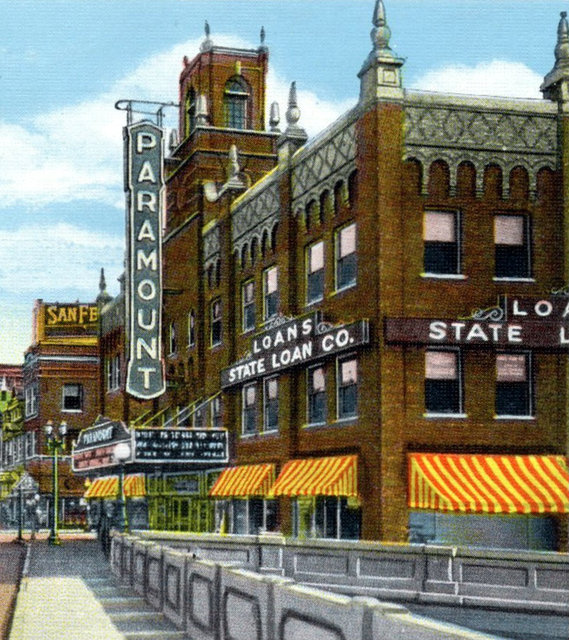 Located on E. 4th Street close to Water Street. The Riviera Theatre was built for A.H. Blank and opened December 29, 1927 with Clara Bow in “Get Your Man” on the screen. On stage were Boyd La Verne & the Riviera Stage Entertainers. The Riviera ‘Grand’ organ was played by guest organist Ralph Jones. With 2,000 seats, the Riviera Theatre was the largest movie theatre to operate in Waterloo. The theatre originally featured vaudeville and silent movies, and when sound came along, it was soon only showing movies.

When visitors entered the theatre’s front doors, they passed through a set of columns, into a circular lobby with lighted alcoves that stood just below a domed ceiling. Straight ahead was the grand staircase to the 2nd-floor foyer, which led in turn to the balcony seating area.

Like many Atmospheric style theatres, the auditorium was designed to make you feel that you were outdoors. Artificial trees stood on both sides of the balcony. An effects machine projected stars on the theatre’s ceiling, and once each night, the moon rose and set.

On May 17, 1929 it was renamed Paramount Theatre. For several years, the theatre presented a series of live stage presentations through an arrangement with the Broadway Theatre League of Waterloo and periodic concerts thru the Waterloo Teachers Association. On these occasions, movies were shut down for the day, the screen flew, the speakers rolled away, and a magical transformation took place.

In 1972, a fire destroyed the stage area. The asbestos fire curtain came down, saving the rest of the theatre, but then it was ultimately demolished.

The area once occupied by the Paramount Theatre is now a riverfront park.

The architects were Peacock and Frank

Here is a 1949 ad from the Waterloo Courier:
http://tinyurl.com/2qfqh8

There were many theaters that we attended in downtown Waterloo during the ‘60’s, but none compare to the Paramount theater. My mother would take my sister and I almost every week to a movie and by far the Paramount was our favorite. The theater was located next to the Cedar River and really wasn’t much to look at on the outside, but after paying for your ticket at the box office and stepping into the lobby, it was truly magnificent. I remember the marble flooring and the two marble columns which stood on both sides of the stairs that led up to the balcony. Those stairs were covered with red carpet. Inside the theater the ceiling held little lights that looked like stars. Many of my fondest movie memories stem from this theater. Many of the Disney reissues were played there and I can recall standing in line in the frigid air across the Fourth Street bridge during the Christmas season anxiously waiting with many other children and their parents to see those Disney movies. One of the last memories I have of the Paramount was attending “Beneath the Planet of the Apes” one or two weeks before the fire that closed it down. I was in high school and my friends and I must have sat through the movie two or three times. Back then you paid one admission price and you could sit there all day. By the way admission at the Paramount in 1972 for someone twelve and older was only $1.00. It was truly a sad day when the Waterloo city council decided to demolish the building instead of restoring it as a historical landmark. It gave way for the flood project and all we have standing there now is a park and a few trees. But I’ll always remember the wonderful Saturday afternoons I spent there.

Here is part of an article dated 10/13/72 from the Waterloo Daily Courier:

A temporary injunction was granted late Thursday afternoon halting demolition at the Paramount Theater building after owners of the adjacent building filed a petition claiming falling mortar and bricks were damaging their building. The injunction was granted on a petition filed Thursday afternoon in District Court, which named R. E. (Hap) Roolf Construction and Demolition, Inc., and the City of Waterloo as defendants.

The owners of all the property from the old theater to East Fifth Street and between Water Street and the Cedar River are Helen Parrish, 824 Edwards St., Cedar Falls, and Margaret Joslyn, Charleston, Mo. They filed the petition. They claim that bricks and mortar fell earlier Thursday on the roof and sidewalk of their property causing damage.

Judge Peter Van Metre issued the temporary injunction Thursday, setting a $100 bond on the plaintiff. Two high walls at the rearmost part of the old theater are all that remain. They are next to the building in question. The temporary injunction specifically restraints the demolition company from “causing brick and debris to fall upon plaintiffs' property and any building thereon.â€

The Riviera theatre (later the Paramount)was built in 1927 on land that formerly accommodated the buildings of the Waterloo and Cedar Falls Union Mill Company. It was an A.H.Blank – Publix house and Theodore Stark and Co of Cedar Rapids had charge of the construction, while C.M. Fox, art representative of Balaban & Katz of Chicago had charge of furnishings.

The Riviera probably opened in January, 1928. The January 3 issue of The Film Daily said that the house would be ready “…around the first of the year….” However, the announcement that the Riviera had opened did not appear until the issue of February 5.

The Riviera (Paramount) theatre had a 3 manual – 10 rank Barton Organ installed when the theatre was built. The organ was removed prior to demolition and still exists today in a private installation in Texas.

And reopened on May 18th, 1929 as Paramount. Both grand opening ads in the photo section.