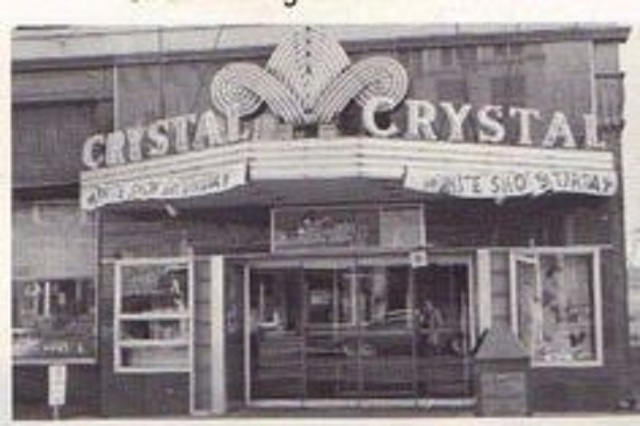 “A. J. Jinks has opened his new Crystal Theatre at Ligonier, Ind. It is said to be one of the most complete and beautiful theatres in this part of the State. Big feature pictures will be the policy of the management.”

The Crystal Theatre is gone, but Ligonier commemorates it in this mural.

I have found multiple articles from newspapers in Elkhart reporting that the theatre opened in January of 1906. I have also found a 1909 edition of the Elkhart Truth that has multiple ads about the opening/reopening of the Crystal on December 27th. Its said they would have vaudeville and “exclusive moving pictures and latest song successes.” It seems Crystal temporarily closed at some point. It is also mentioned to be under the same management as the Bucklen Theatre.

A. J. Inks, who had the Crystal Theatre rebuilt in 1924, had taken over the house in 1909, as noted in the July 9 issue of The Moving Picture World that year:

“Ligonier, Ind. — A. J. Inks, of Toledo, has purchased the Crystal Theater here from Baum & Regula, and has taken possession.”

Albert John “Bert” Inks (misspelled as “Jinks” in the trade journal item I cited in my previous comment) was a native of Ligonier, and was a professional baseball player in the late 19th century. A couple of books with biographical sketches of early baseball players say that Inks operated the Crystal until his death in 1941.

The August 17, 1918 issue of The Moving Picture World said that Inks had also taken over the White Light Theatre in Ligonier, and planned to make improvements to the house.